A new study has found that dogs can greatly aid conservation efforts in finding rare species by smelling out their poo. 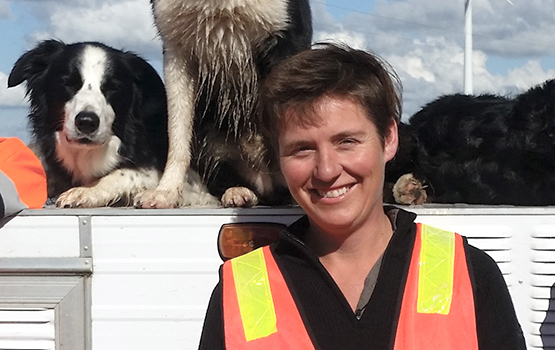 “Dogs have been trained to find evidence of the elusive and endangered Tiger Quoll by finding where they go to the toilet,” says Ms Emma Bennett, a PhD candidate at the Monash School of Biological Sciences.

Emma Bennett with her dogs.

“Tiger Quolls were only rediscovered in 2012 in the Great Otway National Park as they’re camera shy, and have a home range of about 500 hectares, so opportunistic sightings are rare – for humans, at least,” she said.

“You can analyse the DNA in the scats and look at sex, diet, and distribution.”

The trained dogs can provide a non-invasive alternative to trapping for some animals, which reduces stress and the risk of injuries.’

Ms Bennett is formally evaluating the effectiveness of a volunteer dog handling program in the Great Otway National Park, Victoria, as part of her PhD.

The first stage of the study involved six dogs identifying the scent of quoll scats among nine different scats in a 25-square-metre plot of land. All the dogs were very fast, with 50 to 70 per cent accuracy in finding quoll scats. Four out of six teams showed 100 per cent reliability in finding quoll scats. Ms Bennett has found that the volunteer dogs can successfully detect and distinguish scats that the volunteers planted.

The next stages involve detection in various types of vegetation, before finding undiscovered quoll scats for real.

“What I’m really excited about with this program is to demonstrate that volunteers who are passionate about the environment can actually train their dogs on a particular scent, and go out as a group of citizens in science and collect additional data for scientists that would be hard to come by otherwise.”

“The results of this study will be essential in forming guidelines for volunteer dog handling programs. While the study is focused on dogs detecting the Tiger Quoll, it can certainly be expanded to other threatened species.”

Ms Bennett is collaborating with Dr Joslin Moore also from the Monash School of Biological Sciences and Dr Cindy Hauser, University of Melbourne. Her research is funded by Monash University, the Australian Research Council, and the non-profit organisation Conservation Ecology Centre.

She has a research partnership with Parks Victoria. She will today present her results to EcoTAS 2017, the joint conference of the Ecological Society of Australia and the New Zealand Ecological Society, is being held from 26 November to 1 December in the Hunter Valley, NSW.