An international study led by Monash marine ecologists has found that larger fish are much more important to feeding the planet than previously thought. 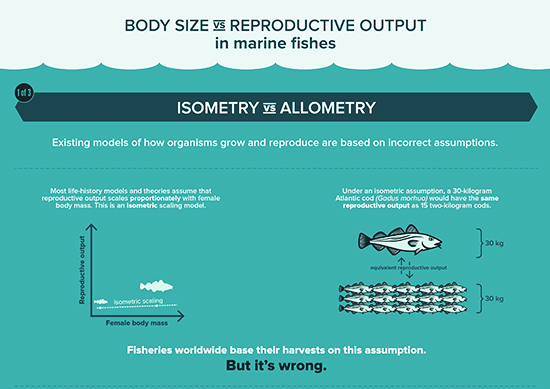 Researchers from the Centre for Geometric Biology at Monash University collected reproductive data on all the world’s fish and found that larger mothers reproduced disproportionately much more than smaller mothers. The data also showed that larger mothers may produce offspring that perform better and are more likely to survive to adulthood.

The graphic shows how the scaling of reproductive energy output in marine fishes affects our understanding of fisheries management, the efficacy of marine protected areas and the impacts of climate change on fish stocks. Credit: Copyright Centre for Geometric Biology, Monash University.

“We have failed to appreciate the importance of large individuals for sustaining fisheries,” said senior study author, Professor Dustin Marshall, the Director of the Centre for Geometric Biology. Professor Marshall is also the head of Monash University’s Marine Evolutionary Ecology Group.

“Our models of how organisms grow and reproduce are based on the wrong assumptions, and as a consequence we are overharvesting wild populations with calamitous consequences for the world’s fisheries. This is particularly dire because around 20% of people on the planet rely on fish for protein,” he said. 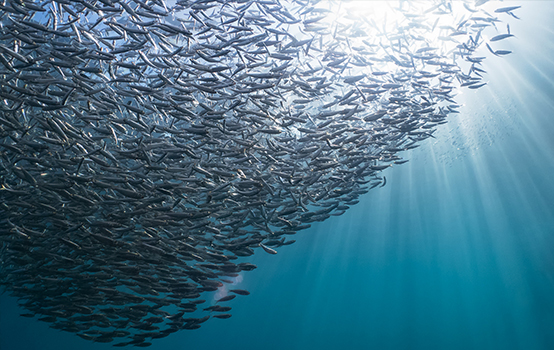 “Biologists have long suspected this assumption is wrong and that fish reproductive output goes up disproportionately so that a 2kg fish has much more reproduction than two 1kg fish,” Professor Marshall said.

“This is important because reproductive output drives the replenishment of fisheries - getting the relationship between size and reproduction right is essential,” he said.

“We have failed to appreciate how important large individuals are for sustaining fisheries.”

Professor Marshall said that worse, climate change is predicted to cause fish body sizes to decrease. The new research shows this will have severe consequences for fish reproduction and replenishment - warmer oceans will likely have fewer fish and much less reproductive output.

But the research also points to some good news, suggesting that current conservation strategies are more potent than previously thought with other research showing that in Marine Protected Areas fish can grow larger by 25% on average.

“Our discovery means that the benefits of Marine Protected Areas have been massively underestimated,” Professor Marshall said, “they produce far more new fish than unprotected areas of the same size.”