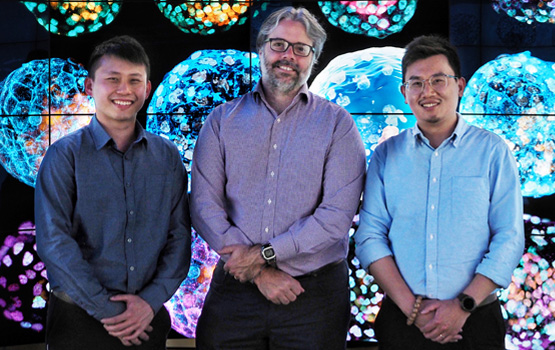 In a discovery that will revolutionise research into the causes of early miscarriage, infertility and the study of early human development - an international team of scientists led by Monash University in Melbourne, Australia has generated a model of a human embryo from skin cells.

The team, led by Professor Jose Polo, has successfully reprogrammed these fibroblasts or skin cells into a 3-dimensional cellular structure that is morphologically and molecularly similar to human blastocysts. Called iBlastoids, these can be used to model the biology of early human embryos in the laboratory.

The research, published today in Nature, was led by Professor Polo, from Monash University’s Biomedicine Discovery Institute and the Australian Regenerative Medicine Institute, and includes first authors Dr Xiaodong (Ethan) Liu and PhD student Jia Ping Tan, as well as the groups of Australian collaborators Dr Jennifer Zenker, from Monash University and Professor Ryan Lister from the University of Western Australia and international collaborators, Associate Professor Owen Rackham from Duke-National University of Singapore and Professor Amander Clark from UCLA in the United States.

The achievement is a significant breakthrough for the future study of early human development and infertility. To date, the only way to study these first days has been through the use of difficult to obtain, and scarce, blastocysts obtained from IVF procedures.

“iBlastoids will allow scientists to study the very early steps in human development and some of the causes of infertility, congenital diseases and the impact of toxins and viruses on early embryos - without the use of human blastocysts and, importantly, at an unprecedented scale, accelerating our understanding and the development of new therapies,” Professor Polo said.

The Polo Lab succeeded in generating the iBlastoids using a technique called “nuclear reprogramming” which allowed them to change the cellular identity of human skin cells that - when placed in a 3D ‘jelly’ scaffold known as an extracellular matrix - organised into blastocyst-like structures which they named iBlastoids.

iBlastoids model the overall genetics and architecture of human blastocysts, including an inner cell mass-like structure made up of epiblast-like cells, surrounded by an outer layer of trophectoderm-like cells and a cavity resembling the blastocoel.

In human embryos the epiblast goes on to develop into the embryo proper, while the trophectoderm becomes the placenta. However, "iBlastoids are not completely identical to a blastocyst. For example, early blastocysts are enclosed within the zone pellucida, a membrane derived from the egg that interacts with sperm during the fertilisation process and later disappears. As iBlastoids are derived from adult fibroblasts, they do not possess a zona pellucida” he said.

An iBlastoid is not generated using an egg or sperm, and has limited ability to develop beyond the first few days.

The lead author on the Nature paper, Dr Xiaodong (Ethan) Liu, a post-doctoral researcher in the Polo Lab, said: “Only when all the data came together and pointed to the same place, could we believe that we had made such a discovery.

Co-first author and PhD student in the Polo Lab, Jia Ping Tan, added: “We are really amazed to discover skin cells can be reprogrammed into these 3D cellular structures resembling the blastocyst.”

The research is published as the International Society for Stem Cell Research is about to release guidelines for research on modelling human embryos in vitro following 2017 and 2018 reports on the generation of mouse “blastoids” in vitro by the UK and Netherland scientists as well as advances in the generation of human stem cells that replicate aspects of early embryonic development. These guidelines are expected in the first half of this year.

It is not known whether the new guidelines will reference the study published today in Nature, which is the first to produce an integrated stem cell model that closely mimics key fate and spatio-temporal decisions made by the early human embryo. However, in a paper published in Stem Cell Reports last February (2020), the Society states that: “if such models could be developed for the early human embryo, they would have great potential benefits for understanding early human development, for biomedical science, and for reducing the use of animals and human embryos in research. However, guidelines for the ethical conduct of this line of work are at present not well defined.”

Although there is no legislative precedent with respect to working with human integrated stem cell models of blastocysts, such as iBlastoids, all experiments had Monash University Human Ethics approval in compliance with Australian law and international guidelines referencing the “primitive streak rule” that states that human blastocysts cannot be cultured beyond the development of the primitive streak, a transient structure that appears at Day 14 in embryonic development.

Under these legislative recommendations, although iBlastoids are different from blastocysts, the Polo Lab did not culture their iBlastoids beyond Day 11 in vitro and they were monitored closely for the appearance of primitive streak-associated genes.

Infertility and miscarriage can be caused by early-stage human embryos failing to implant or failing to progress at the time of implantation. This takes place in the first two weeks after conception when women do not even know they are pregnant. These 'silent' miscarriages are likely to represent a significant proportion of the total number of miscarriages that occur and, according to Professor Polo, the generation of iBlastoids provides a model system that will enable insights into this early stage of pregnancy.

“With further research and the right resources, this discovery could open up entirely new industries for Australia and internationally,” he said.

Caption: Monash University’s Professor Jose Polo answers the following questions: What is an iBlastoid? Why is this research important? Does this mean that human embryos can now be grown in the lab? © Monash Biomedicine Discovery Institute

Caption: Human skin cells are being reprogrammed by a cocktail of reprogramming factors (RF). During reprogramming, these are then placed into V-shaped microwells, where they gradually develop into a blastocyst-like 3D cellular structure called an iBlastoid. © Monash Biomedicine Discovery Institute

Professor Helen Abud discusses organoids and the importance of iBlastoids

Caption: Professor Helen Abud, President of the Australian Society for Stem Cell Research (ASCCR), and also Head, Department of Anatomy and Developmental Biology; Co-Head, Development and Stem Cells Discovery Program; and Scientific Director, Organoid Program at the Biomedicine Discovery Institute at Monash University answers the following questions: The iBlastoid that has been generated by Professor Polo and his team is an organoid, what is that? How important is the generation of this model of a human blastocyst, the iBlastoid? © Monash Biomedicine Discovery Institute

About The Australian Regenerative Medicine Institute at Monash University

The Australian Regenerative Medicine Institute is one of the largest regenerative medicine and stem cell research organisations in the world and Australia’s only research institute specialising in regeneration and stem cells.  Located on the Clayton campus of Monash University, researchers at ARMI focus on understanding the basic mechanisms of the regenerative process, aiming to eventually enable doctors to prevent, halt and reverse damage to vital organs due to disease, injury or genetic conditions.