Using medical and networking skills to put research into practice

With interests ranging from bones to babies and early IVF involvement, Professor Graham Jenkin is a busy man who likes to get things done. He's guiding research into antioxidant and stem cell therapies for at-risk babies, working with Mesoblast Ltd to commercialise a stem cell treatment for damaged backs and using his IVF expertise to help endangered species.

As an honorary professor of obstetrics and gynaecology, holder of a personal chair and deputy director of the Ritchie Centre at the Monash Institute of Medical Research (MIMR), clearly Graham has form.

He describes himself as a "Jack of all trades and master of none", which is, of course, not true. He's a master of reproductive physiology - his specialty - and networking.

"I love my research," he says, "but I realise that it has to have translation. So, networking within Monash and outside to bring in commercial organisations is very important."

Graham's networking talents were recognised in 2009 when he won the Vice Chancellor's Award for Excellence in Innovation and Collaboration in Research with Industry.

He was honoured for his work with biomedical company Mesoblast, founded by Monash medical graduate Sylviu Itescu (now a listed Australian company), which is working with a diverse team that Graham put together to perfect an adult stem cell treatment for damaged spinal disks.

The work involves Monash engineers and CSIRO scientist Jerome Werkmeister, who are creating a biodegradable matrix, or scaffold, on which to grow cartilage from mesenchymal progenitor cells (MPC), developed by Mesoblast.

"The trick is to get a matrix that is strong enough to keep two vertebrae apart, while cartilage forms, but then able to degrade in a specific way," he says.

The MPC cells are derived from adult stem cells, found in bone marrow and fat, which typically turn into cartilage and then bone. Graham's team is getting them to stop before the bone stage, just as they've become tough but flexible enough for disk repair. 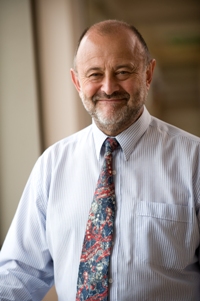