In Australia, a child is born with Cerebral Palsy every 18 hours. As a physician and the Head of Paediatric Neurology at Monash Medical Centre, Dr Michael Fahey is too familiar with the human face of the condition. However, as a researcher specialising in neurogenetics, Dr Fahey also knows there is work underway that could one day lead to a cure.

Neurogenetics is concerned with the link between our genes and the diseases and disorders of the nervous system. Dr Fahey's research focuses on using neurogenetics to understand the causes of movement disorders and diseases of the muscle and nerve. These include Cerebral Palsy, a disease that affects thousands of Australians.

While scientific researchers of Dr Fahey's standing - he has undertaken research and training with Monash University, Melbourne University, the Royal Australasian College of Physicians, the Alfred Hospital, Sydney Children's Hospital and the Murdoch Children's Research Institute - are cautious about raising expectations about the possibility of finding a cure for disorders such as Cerebral Palsy, he is excited by the insights genetic research is generating.

"The next stage of research into these conditions is going to be to try and evolve treatments for them," he says.

"At the moment these are conditions which we are becoming increasingly good at diagnosing and a genetic diagnosis will allow us to understand the mechanisms behind the disease. Our hope is that for many of the conditions that we're looking at treatments that will be developed within my working lifespan.

"this is about moving beyond managing the disease to actively look for cures. That's our motivation, and I hope this is real. This kind of research works on long timescales, I think that's fair to say, but it's always hoped that treatments will evolve quickly from the discover of the causes behind the condition."

Dr Fahey believes that Monash and its network of partners are in a great position to be world leaders in the field. He is currently collaborating on research into treatments for Cerebral Palsy with researchers at the Ritchie Centre, part of the Monash Institute of Medical Research. The work has evolved out of Ritchie Centre strengths in women's health and foetal and newborn medicine. It focuses on melatonin, a hormone produced in the brain, and he is confident the research will soon move to human trials.

In addition to working with the Ritchie Centre, Dr Fahey also collaborates on gene discovery research with Genetic Health Services Victoria and experts at the Alfred Hospital. He is also involved in the treatment of rare neuro-metabolic diseases with partners at the Royal Melbourne Hospital.

Outside of the lab, he maintains a heavy workload as a physician. He is Head of the Paediatric Neurology Unit at Monash Medical Centre, and works in neurogenetics clinics at the Royal Melbourne and St Vincents Hospitals. He is also collaborating with Professor Elsdon Storey, Head of the Neurology and Stroke Unit at the Alfred. He still finds the time to act as neurologist at the Paediatric Rehabilitation Clinic and has co-founded a mitochondrial clinic. 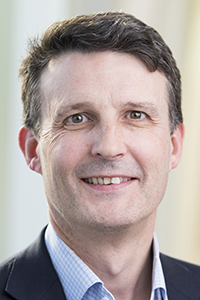