Monash astrophysicists using the ALMA telescope in Chile have a made a world-first discovery with the sighting of a new planet inside a protoplanetary disc.

“Discs of gas and dust surrounding young stars are the birthplace of planets,” said Dr Pinte.

“However, direct detection of protoplanets forming within discs has proved elusive to date.

“We present the detection of a large, localized deviation from Keplerian velocity in the protoplanetary disc surrounding the young star HD 163296.” 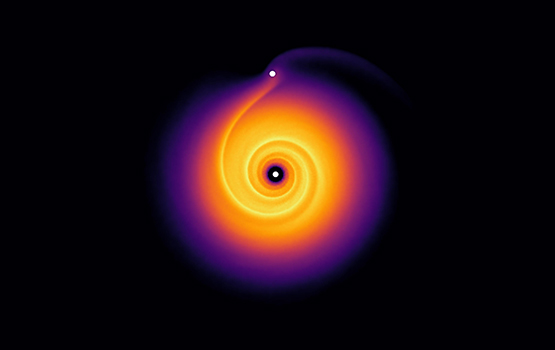 Computer model showing the spiral pattern generated by a newborn planet orbiting in a disc of gas around a young star. Credit: Pinte et al 2018.

The observed velocity pattern is consistent with the dynamical effect of a two Jupiter mass planet orbiting at a radius approximately 260 times the distance between the Earth and the Sun.

“This is the first ‘baby planet’ to be discovered and it is still orbiting in the swirling disc of material that it was born in,” said Associate Professor Price.

“The planet orbits just outside the dust rings seen around the star ‘HD163296’at a distance of 360 light years.”

The astrophysicists say their evidence is in the form of a localised change to the flow of gas around the star discovered in data from the ALMA telescope.

They detected a ‘kink’ or ‘bump’ in the flow where material was flowing around the planet.

“The kink can be beautifully reproduced in computer models with a planet twice the mass of Jupiter,” said Dr Pinte.

Associate Professor Price said recent pictures of the disc around HD163296 showed a spectacular series of ‘rings’ that were thought to be carved by baby planets.

“But until now we had no direct evidence for the planets themselves,” he said.

Using the ALMA telescope the astrophysicists made a map of how fast the material was swirling around the star.

But while trying to understand this map they noticed an anomaly — part of the disc seemed to be flowing around something else.

“We compared the observations with computer models to show that the ‘something else’ fits beautifully with predictions for the flow pattern around a newborn planet,” Dr Pinte said.

The discovery means that with ALMA, scientists should be able to find many more planets in their infancy.

“This helps us to understand how planets like those in our solar system were born,” Associate Professor Price said.