Mr Ram Nataraja received his bachelor’s degree in Medicine and Surgery at the Royal Free Hospital School of Medicine, which later merged with University College London in the UK. During this time, he also obtained an intercalated bachelor’s degree in Molecular Medicine with Basic Clinical Sciences. After obtaining a postgraduate certificate of completion of training in Paediatric Surgery he worked for a couple of years in London as a Consultant at Chelsea & Westminster Hospital in London and an Honorary Senior Clinical Lecturer at Imperial College London before emigrating to Australia. He is currently working as both a Paediatric Surgical Consultant and also the Director of Paediatric Surgical Simulation & Innovation at Monash Children’s Hospital in Melbourne. He has also been appointed a Senior Lecturer in Paediatrics at Monash University.

He has an interest in the minimally invasive techniques for both paediatric and neonatal surgery, including surgical robotics, and also in teaching and training. He has had clinical exposure to paediatric surgical robotics during his appointment at Chelsea and Westminster Hospital, as this was the first UK center to have a Da VinciTM Robotic platform solely for paediatric surgery. This current robotic platform has limitations to its application in the paediatric setting, and he is keen to further develop and adapt this technology.

He has co-authored a Paediatric Textbook “Rapid Paediatrics & Child Health” published by Wiley-Blackwell Publishing now in its second edition, as well as, numerous book chapters. He developed one of the first validated paediatric surgical laparoscopic bench trainers at Great Ormond Street Hospital in London over 10 years ago, and continues to be at the forefront of innovation in surgical simulation-based learning. The Paediatric Surgical Simulation Center in the new Monash Children’s Hospital is the largest paediatric center of its kind in Australasia, and will also have a significant role in the international development and integration of simulation into surgical training.  He has co-authored multiple different articles in peer-reviewed journals related to the minimally invasive technique for common paediatric surgical conditions and also surgical training.

He also has a strong interest in the use of simulation in transition countries and improving patient outcomes through educational reforms. He is the country lead for Myanmar in Monash Children’s Hospital International and has conducted 6 courses in country over the last few days. This work involves the Royal Australian College of Surgeons and also the Royal College of Surgeons of Edinburgh. All of this work is conducted with sustainability and therefore transition to local faculty conducting the courses themselves. He has also acted as a temporary advisor to the World Health Organisation for the use of simulation in educational reforms in 2018. 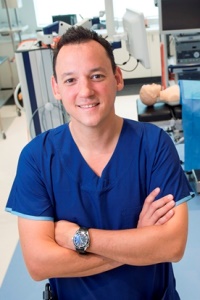