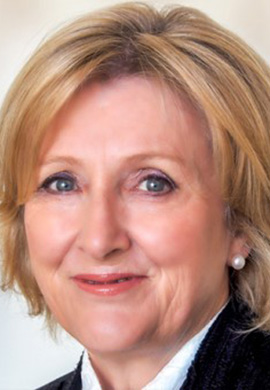 Over the course of her long and distinguished career in Medicine, Professor Leanne Rowe AM has always aimed to give back to her community. This compulsion stems from her time at Monash as a student, which coincided with a period of personal hardship.

“I will never forget the Monash staff and students who supported me through those six years and remain very grateful to them – they became my family,” she says.

“That hardship has influenced my medical practice greatly. In particular, I attribute my empathetic approach to patients to that difficult time.”

She has come a long way since then. Among her many achievements since she graduated from Monash Medicine, Professor Rowe counts an Order of Australia for service to medicine, ‘The Rose Hunt Medal’ and ‘The College Medal’ from the Royal Australian College of General Practitioners, and ‘Best Individual Contribution to Health Care in Australia’ from the Australian Medical Association.

She was awarded a Doctor of Laws (honoris causa) by Monash University in 2016 for service to the University as Deputy Chancellor and for outstanding service to medicine.

She has written for numerous clinical publications, sat on an array of boards and served in state and federal government expert roles advising on issues such as detention health and suicide prevention.

“I started out in rural general practice, and stayed in the field for nearly 30 years,” Professor Rowe says. “It was challenging at times, but also really rewarding and satisfying and I have so many great memories. What I’ve really loved about my career is the diversity of experience I’ve been lucky enough to garner throughout it.”

Professor Rowe has worked in many areas of medicine, across the private and public health systems, and with people of all backgrounds – from remote Indigenous communities to corporate health in Melbourne. “I really love working with people from diverse backgrounds – it enriches my life,” she says.

“My husband and I set up a practice in rural Victoria, but the real highlight of my clinical career was in Far North Queensland with the Indigenous Wuchoperren community.”

“I also set up a clinic for homeless youth in Geelong, and worked there for 10 years. It gave me some incredible insights into healthcare and what we can do to prevent homelessness and the many other issues impacting young people, including mental illness, drugs and alcohol and sexual health.”

In around 2002, following a long and enriching career in medicine, Professor Rowe made contact with Monash, because she wanted to give back to the university that had meant so much to her. “I always felt that debt and I believed that I had a range of skills to contribute, including governance skills, so I contacted the then-VC Richard Larkins and met with the Chancellor, and was appointed to the University Council,” she says.

She went on to be Deputy Chancellor, which she says was the highlight of her career. “This experience took me outside of medicine – away from the clinical consulting room, it opened a new world up to me,” she says. “I was looking to contribute to the university, but that experience also taught me a lot – my alma mater had once again given me a gift.”

“I love learning new things. I feel fortunate that my career has given me so many great insights into life and so many opportunities to help people. Most of all I feel that I am a patient advocate – so whether I work on a commercial board or in rural health, I aim to improve the lives of others. My move into medical leadership was prompted by this passion for advocacy.”

Professor Rowe says she developed her leadership and writing skills organically, by advocating for funding to members of Parliament and writing submissions. “I was terrified, but I did it because I was committed to the cause,” she says. “This led me to my later career in leadership positions – I feel I was tapped on the shoulder for such roles and hadn’t consciously sought them out.”

“I was appointed to the Board of Barwon Health and worked with Mrs Patricia Heath, who chaired the board of Geelong hospital. She took me under her wing and taught me about board governance and leadership and that was really valuable.”

This led to a range of positions on a number of Boards and Councils with a range of not-for-profit and for-profit health-related organisations, which included the Monash University Council and the Royal Australasian College of General Practitioners (RACGP), as Chair of its Council.

“Given that I had never felt confident in my writing abilities, having failed English in the middle of Year 12, my next career move was an unlikely one,” she says. “Former AMA President and Leader of the Opposition, Dr Brendan Nelson, who was interested in Indigenous health, asked me to write about my experiences when he came to visit our primary care clinic in far North Queensland. With his encouragement, I wrote my first published piece in Australian Medicine and it received a wonderfully warm reception – people loved it and told me they thought it was so powerful. This set me on my writing journey. I founded the well-regarded Medicine is Beautiful web page, to tell stories from my career and to encourage doctors to write.”

“I’m still connected to my peers from my student days and, prior to COVID-19, 2020 was going to be the 40-year anniversary celebration. I keep in touch with fellow students and really enjoy those enduring bonds. What Monash has given me has meant the world to me.”

What Monash has given me has meant the world to me.