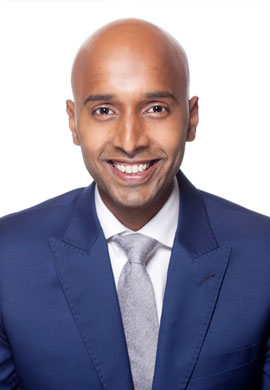 In his role, he manages a portfolio of laboratory products with a focus on sales of instruments, consumables, reagents and service across the region.

“What I really enjoy about my role is that it gives me the opportunity to view our impact in two ways: Supporting our customers directly to improve their productivity which in turn drives better science as well as the positive impact to my company’s revenue and profitability.”

Despite having grown up in Singapore and receiving a place to study a Life Science degree locally, Surendran knew he wanted to move overseas for his tertiary studies.

“As Monash has a very strong scientific and research background, it was my first choice during my application process. I was always keen on a scientific degree but wanted to try studying and living in a new country to broaden my thinking.”

“I was also part of the Singapore Field Hockey National team at the time and as Australia was the top field hockey nation, studying in Australia allowed me to play hockey at a higher level. During my university days, I was able to represent Monash Hockey as part of the State League team as well as represent Singapore at the Asian Games Qualifiers in 2006.”

When asked what he enjoyed most about his degree, Surendran said it was the fact that the degree really prepares you for the real world.

“You get a good perspective on a wide range of scientific topics from very experienced lecturers and there is a lot of emphasis on learning and application in a team environment. I made very good life-long friends from Monash as well! The knowledge and laboratory skills picked up, particularly during my honours year, enabled me to make an easy transition to the pharmaceutical industry in my technical role,” he said.

“Some of the products in my commercial portfolio now are products that I had first used during my university days.”

Studying a Monash biomedical science degree helped Surendran pursue a career in the pharmaceutical industry to further learn how drugs are manufactured, tested and released for clinical use. He chose to enter the industry straight after completing his degree, despite being offered a fully sponsored PhD scholarship opportunity.

This focus and direction has now taken him all over the world.  After completing his honours year, Surendran was hired by Lonza, a leading provider in healthcare solutions, to work in a quality control role at their Cell Therapy facility in Maryland, USA.

It was through this role that he was eventually relocated back to Singapore to kick-start the Lonza Cell and Gene Therapy facility, and then later joined Thermo Fisher Scientific in a commercial role as their Regional product manager.

Shortly after, he moved up the ranks into an Asia Pacific (APAC) role and then into his current position as Senior Business Development Manager.

Looking back at his time at Monash, Surendran says the most notable experience from his degree was his honours year and he would recommend an honours year to anyone who is still unsure as to whether they want to enter academic, research or industry-type roles.

“If you are unsure, the intense hands-on honours year will give you better clarity as to whether research is your passion, or if you would prefer to enter the industry and work in related functions such as sales, marketing and other roles.”

“Whilst the honours year can get very technical, it provides you with insight from an end-user perspective, which is valuable even if you transit to a commercial role in the future.”

Another noteworthy experience from his time studying his biomedical science degree would be the achievements of his honour’s year.

“It was by far my most fulfilling experience as I managed to generate a lot of data in my countless hours in the lab,” he said.

“The lab wrote up my findings and published the paper in one of the respected journals, The Journal of Circulation Research, and I was credited as a joint first author for the paper which was a first for me.”

“Great credit to my professors and mentors who treated me like a full-fledged researcher and gave me the autonomy to do a lot of independent research.”

Learn more about the Bachelor of Biomedical Sciences (Honours) degree

My professors and mentors treated me like a full-fledged researcher and gave me the autonomy to do a lot of independent research.