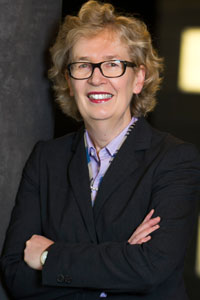 Professor Christina Mitchell graduated with a degree in Medicine from Melbourne University and undertook general physician and haematology training fellowships. She obtained a PhD from Monash University, concentrating on the anticoagulant activity of protein S, and graduated with a Fellowship from the Royal Australian College  of Physicians and also a Fellowship in Pathology. She then undertook a 3 year post-doctoral fellowship at Washington University purifying phosphoinositide 3-kinase (PI3-kinase) signal-terminating enzymes. Professor Mitchell returned to Australia as senior lecturer in Medicine at Monash University  and Box Hill Hospital, she became Associate Professor soon after, while also conducting research on the newly emerging family of enzymes, inositol polyphosphate 5-phosphatases, negative regulators of PI3-kinase signalling. In addition, she held a position of Professor and Head of Biochemistry Department at  Monash University (2000), until being promoted to Head of School of Biomedical Sciences (2006-2011). The major research direction of her group is to characterise the metabolic pathways that regulate phosphoinositide signalling, in particular PI 3-kinase signalling in human cancer. Professor Mitchell  has practiced as a general physician from 1990 to 2000 and as a specialist haematologist from 1990 to 2011 in the Department of Haematology at Box Hill Hospital. She has a long commitment to the development and integration of the medical curriculum at Monash University.

Professor Mitchell has published over 100 papers and received numerous awards, including Monash University 50th Anniversary Research Award (2008) and Dean's Prize for Excellence in Research (2003). In addition, Professor Mitchell serves on editorial boards of Journal of Biological Chemistry and IUBMB Life.

Professor Mitchell was a member of the scientific committee for the Anti-Cancer Council of Victoria (2001-2010), served on several NHMRC review panels for both project grants and fellowship applications and has been a member of the board of VESKI (Victorian Endowment for Science, Knowledge and Innovation).

Professor Mitchell and her research team are the recipients of several National Health and Medical Research grants, an ARC grant and a Muscular Dystrophy Association of the USA grant. Her research laboratory comprises seven post-doctoral fellows, a research assistant, seven PhD students and three honours students.

Professor Mitchell was appointed Academic Vice-President and Dean, Faculty of Medicine, Nursing and Health Sciences in 2011, and has overseen unprecedented growth in research and education activity, revenue and impact.