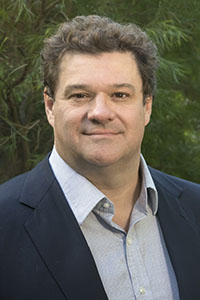 James Whisstock performed his PhD in bioinformatics and structural biology at the University of Cambridge.  In 1997 James moved to Australia and established his group at Monash University.

James took up the role of Deputy Dean Research in the Faculty of Medicine Nursing and Health Sciences in January 2022.  In addition James is the Scientific Head of the Australian EMBL partnership (2017-present). He currently holds an ARC Laureate Fellowship together with an Honorary NHMRC Senior Principal Research Fellowship.  His previous appointments include an ARC Federation Fellowship.  James was awarded the 2006 Science Ministers prize, the 2008 Health ministers prize and the 2010 Gottschalk medal.

Over the course of his career at Monash, James has contributed to the development of several key Monash technology platforms, including protein production, eResearch and X-ray crystallography. Most recently he led the establishment of the Monash Ramaciotti Cryo-Electron Microscopy platform.