Can you please tell us about your career journey to date? After completing my medical degree with honours in 1993, I started as an intern at Southern (now Monash) Health. It was a much smaller place than it is now! After obligatory rotations in medicine, surgery and emergency, and interesting electives in psychiatry and general practice, I turned my focus to my original love, radiology.

With hard work and a little luck, I entered the Radiology training program at Monash and qualified in 2001 as a Radiologist, passing the fellowship exams on my first attempt.

I have always kept a place at Monash Health while also working for several private Radiology providers.

In 2008 I was a founding member of Imaging Independently, a private Radiology group providing services to Eastern Health which we continue to this day.

I have always believed that patients should receive the very best of care in the public system and have strived to be a compassionate, caring and diligent doctor in all my endeavours. In recent years, I have taken on a larger role in chronic pain management through interventional radiology. Relieving someone’s chronic pain is wonderful and the patients are effusive in their thanks. I have also tried hard to give back to the system that trained me and for many years I have been one of the directors of radiology training at Monash Health. What inspired you to pursue a career in Medicine and why did you choose to study at Monash University?

I was one of those children who enjoyed school and found that maths and the sciences were particularly interesting. My mother worked as a receptionist for a solo practice Radiologist and he was a very impressive man - warm and friendly and he clearly enjoyed his work. Of the adults I knew, he was one of the few who was very positive about me being a smart kid and enjoying learning. The fact that he always had a nice car certainly left a positive impression on this teenage lad too!

So, despite there being no medical or paramedical people in my family or our extended social circles, I decided to pursue medicine and radiology was my aim. Having done most of my growing up in Canberra, it was disappointing there was no local medical school. I applied widely and was lucky to secure one of the two places that Monash kept aside for interstate students. I still work with the other successful interstate candidate who is a paediatric neurologist at Monash Health.

What's most memorable about your medical student days at Monash?

I have so many good memories. I knew no one on arrival in Melbourne but soon found many new friends. I was particularly well looked after by the mothers of my new Greek friends who would feed me until I could eat no more. I found many kindred souls in the 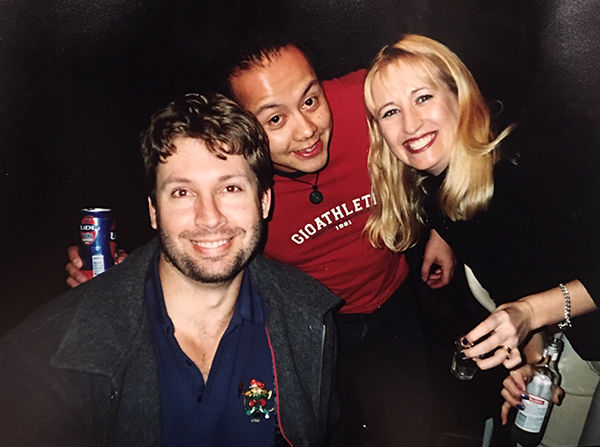 Living in halls of residence in the Howitt tower was a great way to meet people, including my wife, Georgie, also now a Monash alumna, with science and engineering degrees and a PhD in materials engineering.

While in classes, I was always impressed by the easy intellect and clever teaching methods of many of those who gave their time to us. It was nice to see people who were not afraid to be intelligent and were happy to pass their knowledge and secrets to the next generation. I have had the pleasure of meeting some truly great trailblazing pioneers, people who were not afraid to challenge the orthodoxy for the betterment of their patients. This willingness to challenge the system for their patients left a strong impression on me. Do what is right, even if it isn’t easy.

Do you have any thoughts or reflections to share about being Monash University's first indigenous Medical graduate?

Much as Melbourne is a melting pot, so is my family. I am a Territorian, born in Darwin in the late 1960s and our family history includes folk from many backgrounds. In this respect we are like many other families and it wasn’t really a big deal to us that we had roots in many cultures including Indigenous, Scottish, Lebanese, Nordic and Mauritian Creole amongst others. them. I am very interested in people’s experiences of growing up and living in different cultures and ethnic groups. I am keenly aware of the challenges that face Indigenous students and students from recent immigrant and/or low socioeconomic backgrounds. Whenever I meet a student or junior doctor in the system from these backgrounds I encourage them to aim high and not to just be satisfied with being the first doctor in their families.

I am proud to see the strong involvement that Monash Health has in refugee and low socioeconomic health care and am proud to contribute where I can. I think it’s hard to be a smart kid in a situation where being smart isn’t thought of as being of as much value as other attributes such as sporting talent or fulfilling family obligations. Improved exposure to positive role models can help and I was very lucky in this regard.

Can you please share a career highlight to date?

I am proudest of training a generation of bright young radiologists in my time at Southern and Monash Health. They are doing great things for patients everywhere.

On a personal level, I am humbled by the very nice things patients say to me about what I do for them and that they keep putting their trust in me to take care of them.

What currently inspires you to do the work you do?

The environment in medicine has become ever more busy and resource limited. Doing the very best I can for my patients is what keeps me focused. I always give my best, whether it’s carefully checking scans for abnormalities, making patients as comfortable and pain free as possible during procedures or simply listening to them with humanity. I am also inspired by the bright young trainees we have. They are all extremely clever and I have to be my best to keep up with them!

Be polite, gentle and kind. Treat people as you would expect them to treat you.

Don’t do what is easy, do what is right. Even if it’s three times as hard! When I started at Monash in the late 1980s it was still a young brash university, finding its place in the world. The inner-city hospitals still referred to us as “kids from the farm”. Campus was filled with all sorts of weird people and funny clubs and societies. The Friends of Middle Earth had their table in the cafeteria with elves outnumbering orcs by at least 8 to 1. Tolkien would be proud.

Even so, Monash was already displaying academic strength and as a junior doctor I had the pleasure of supervising medical students who went on to gain Rhodes and Fulbright scholarships.

Monash has certainly grown up! It is now highly regarded as a Medical School and as a University. The links with Monash Health have become ever stronger with the Monash Health Translation Precinct on site at Monash Medical Centre, Clayton and the new heart hospital on Clayton campus not far from opening.

I hope the next 60 years continue the trend.

This willingness to challenge the system for their patients left a strong impression on me. Do what is right, even if it isn’t easy.