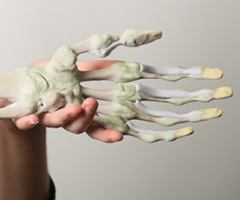 A unique kit containing anatomical body parts  produced by 3D printing is now available for medical students to use worldwide.

The kit, developed by Monash University  scientists, is the first commercially available resource of its kind.

The team from Monash announced last year their  3D Printed Anatomy Series – a kit that contains no human tissue, which does  however contain representative regions of the body such as limbs, chest, abdomen, head and neck that would be needed to teach human anatomy.

After signing a deal with German anatomical  model makers, Erler-Zimmer, the series is now available for sale online.

For  those wanting to read about the innovative techniques involved, Professor Paul  McMenamin,  Director of the University's Centre for Human  Anatomy Education,  and his team have published a paper titled The Production of Anatomical  Teaching Resources Using Three-Dimensional (3D) Printing Technology in  the journal Anatomical Sciences Education.

For centuries medical students have needed to  use donated human cadavers to learn anatomy as part of their preparation for  dealing with patients. But preserved cadavers are not always available in many countries and plastinated bodies, made famous by Gunther von Hagens, can cost  hundreds  of thousands of dollars and the waiting list can be as long as two  years.

The deal announced today means that anyone,  anywhere can buy anatomically correct, plastic 3D prints of a leg, arm or a  full body – online, with delivery within weeks at the fraction of a cost of an embalmed or plastinated body. The series also includes anatomically correct  models  that would be impossible to visualise in an embalmed body – such as 3D  prints of the vasculature of the brain, based on a CT scan, with fine, spidery  veins and arteries resting nest like within that skull.

Professor Paul McMenamin said the 3D prints of the entire human body had  been created using the skills of the team at the Centre, using technologies  such as laser hand-held scanners,  MRI imaging and CT scans.

"For centuries cadavers bequested to  medical schools have been used to teach students about human anatomy, a practice  that continues today. However many medical schools report either a shortage of  cadavers, or find their handling and storage too expensive as a result  of  strict regulations governing where cadavers can be dissected," he said.

"We believe our kit will revolutionise  learning for medical students by enabling them to look inside the body and see  the muscles, tendons, ligaments, and blood vessels. At the moment it can be  incredibly hard for students to understand the three dimensional form of  human  anatomy, and we believe this kit will make a huge difference – a sort of 3D textbook if you like."

After scanning real anatomical specimens with  either a CT or a surface laser scanner, the body parts are 3D printed either in  a plaster-like powder or in plastic, resulting in high resolution, accurate  colour reproductions.

Professor Paul McMenamin said the simple and  cost-effective anatomical kit would dramatically improve trainee doctors' and  other health professionals' knowledge and could even contribute to the development  of better surgical outcomes for patients.