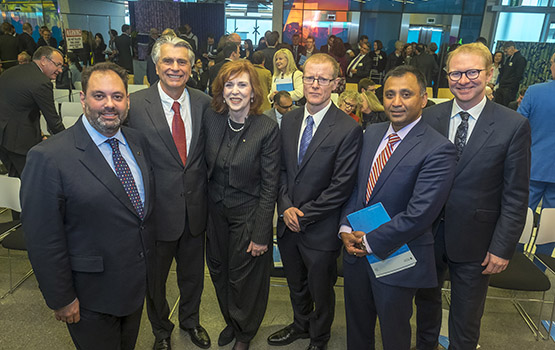 Monash University has signed a major multiyear research and commercialisation deal with Janssen Biotech, Inc. (“Janssen”), one of the Janssen Pharmaceutical companies of Johnson & Johnson, for the early detection and prevention of rheumatoid arthritis, a debilitating autoimmune disease which affects more than 400,000 Australians and more than 24.5 million people worldwide. The agreement was facilitated by Monash Innovation, part of the recently established Enterprise portfolio at Monash University, and Johnson & Johnson Innovation.

"It is great to have our world-leading universities partnering with global companies to drive innovation that will create jobs in Victoria's medical technologies and pharmaceuticals sector."

Professor Gardner said the partnership between the Monash Biomedicine Discovery Institute and Janssen demonstrated the potential for world class research excellence and industry expertise to deliver health and economic benefits on a global scale:

“Monash is recognised internationally for its expertise in biomedical innovation and this important collaboration opens up the possibility to transform the lives of rheumatoid arthritis sufferers,” Professor Gardner said.

“With nearly 25 million people suffering from rheumatoid arthritis worldwide, the agreement has the potential to deliver significant benefit to community, industry and research.”

Deputy Vice-Chancellor (Enterprise), Ken Sloan, said the strategic partnership with Janssen is another example of Monash actively engaging with industry in order to translate its world-leading research:

“Monash University is at the heart of Melbourne’s flourishing south east corridor and collaborations such as these are accelerated through our proximity to major biomedical research infrastructure such as the Australian Synchrotron, Monash Biomedical Imaging and other research facilities such as CSIRO, which is helping create a pipeline of translation from basic research to commercialisation, and making Monash a preferred partner for industry,” Mr Sloan said.

Director of the Monash Biomedicine Discovery Institute, Professor John Carroll, said the collaboration is the result of an existing productive three-year partnership with Janssen and adds to Monash University’s growing international reputation for translational research.

“This exciting strategic partnership is another example of how the Monash BDI’s strong clinical relationships and early industry engagement, are leading to a pipeline of medical breakthroughs,” Professor Carroll said.

The Monash-based researchers, led by ARC Laureate Fellow and Imaging Centre of Excellence Chief Investigator, Professor Jamie Rossjohn, have been investigating the impact of therapeutics on immune systems affected by rheumatoid arthritis.

“This collaboration is a great opportunity to take our advances in basic biomedical science and translate them to the market for the betterment of the Australian population and worldwide,” Professor Rossjohn said.