A $140,000 donation kicks off research for Visual Snow

Many young people are affected by the hallmark symptom of constant and dynamic “snow” in the entire field of vision.  One minute you see the world clearly and in an instant, without warning, a life is changed forever. It can be a 24/7 battle because it never goes away with the eyes opened or closed. Others are born with the condition, and many don’t realize how abnormal their vision really is. A new dilemma can occur for those seeking a diagnosis or treatment. Eye tests almost always come back normal because Visual Snow is not an eye disorder but a brain malfunction.  Because Visual Snow manifests itself in the eyes, it often leaves both patients and physicians in limbo, uncertain of where to go next for a diagnosis. This also makes it difficult to estimate how many people are affected.

While the cause is unknown, Visual Snow is believed to be a neurological problem whereby the brain incorrectly processes visual information sent from the eye. Migraines, floaters, auras and other neurological symptoms are also associated with the syndrome, which can significantly diminish the quality of life for those affected.

Associate Professor Fielding says, “We’re extremely grateful to the VSI for their support and faith in our work in Visual Snow. This debilitating condition is more common than previously thought, and the impact on affected individuals, families and our health-care system, is far greater than we currently recognize. We’re excited to be raising awareness and ultimately moving towards a cure.”

The Australian team is one of the very few research groups globally to conduct translational research into the condition, which has only been identified and characterized in the past 20 years. Monash University’s research into Visual Snow will include evidence of the neurological basis which includes behavioral studies, oculomotor assessments, electrophysiology studies and neuro-imaging.

Sierra Domb, Founder of the Visual Snow Initiative said, “We are proud to present Monash University with a cheque in the amount of A$140,000 and specifically express our gratitude to  Professor Owen White and Professor Joanne Fielding for their research efforts into Visual Snow.”

The Visual Snow Initiative has a global team of researchers, physicians and neuroscientists collaborating and has set up a global fund for ongoing research.

The inaugural Visual Snow Conference was held in San Francisco in May 2018 bringing global awareness for those dealing with the syndrome. “We were contacted by thousands of people in 35 countries,” says Ms. Domb, conference founder. “We then created the Visual Snow Initiative to Collaborate, Educate and Cure.”

The Monash University researchers are recruiting participants and are asking interested people with the following symptoms to email visual.snow@monash.edu:

For detailed information or to make a donation please visit: www.visualsnowinitiative.org 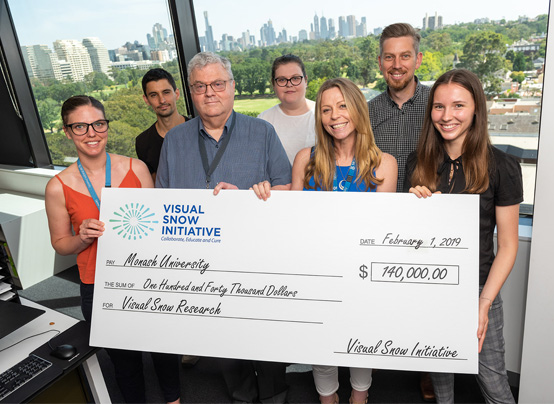