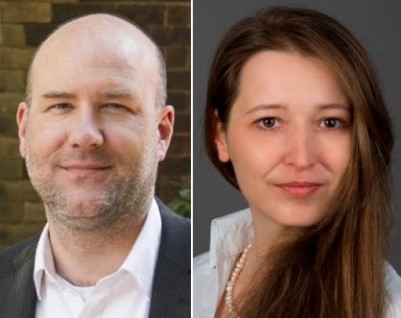 Associate Professor Christoph Hagemeyer and Dr Karen Alt from the Australian Centre for Blood Diseases (ACBD) together with other researchers from Monash University, the University of Melbourne, the Alfred Hospital and Austin Health have been awarded $1 million* to conduct translational research into idiopathic pulmonary fibrosis (IPF).

IPF causes scar tissue (fibrosis) to build up in the lungs, progressively diminishing lung function and the transportation of oxygen into the bloodstream. The heterogeneous disease is progressive, fatal and incurable.

The Monash researchers will conduct advanced imaging on an antibody developed by AdAlta† called AD-214 to observe its distribution and biological effects in preclinical models of IPF. AD-214 targets a receptor called CXCR4, which has been implicated in inflammation and fibrosis, and has been shown to modify IPF disease progression in a variety of animal models. CXCR4 is generally only found on white blood cells and is dramatically increased in tissues in patients with fibrotic disease.

“The antibody developed by AdAlta will hopefully stop fibrosis in patients by blocking this receptor,” Associate Professor Hagemeyer said. “We’ll use our preclinical imaging expertise and equipment to closely characterise the antibody, to understand where it is going in vivo and how fast it is removed from the blood,” he said.

The team will enlist their considerable expertise in positron-emission tomography (PET) and antibody radiolabelling. The experiments will be conducted at Monash University’s newly established $15 million preclinical imaging facility at the Alfred Hospital.

“By using PET, a radiolabelled antibody can be followed throughout the body and the engagement with the target can be monitored in real-time,” Associate Professor Hagemeyer said.

The work will then progress to clinical development of AD-214.

“What is really exciting for us is that the project will progress from preclinical work to a clinical trial in two years,” Dr Alt said. “For us scientists that is the ultimate goal, to contribute with our work to the translation to patients, hopefully helping to cure them or at least improve their situation,” she said.

Associate Professor Hagemeyer said the imaging would allow clinicians to stratify patients to see which patients were likely to respond to the treatment, which were not and which ones needed a higher dose.

AdAlta Managing Director and CEO, Dr Tim Oldham, said using a radio-labelled version of AD-214 would reduce the time it takes for AdAlta to measure the drug’s impact.

“We are in advanced preparations to commence initial human clinical trials of AD-214 in mid-2020, including inclusion of IPF patients and this imaging agent into our clinical program as early as possible, and we acknowledge the support of the BTB Program* that is making this possible,” Dr Oldham said.

Dr Alt said the findings may be applicable to other types of fibrosis and cancer. “This receptor is known to also play a role in cancer,” she said. “There may also be other conditions to apply the radiotracer to, if it works.”

*The project is funded by MTPConnect’s Biomedical Translation Bridge (BTB) Program and led by the biotech company AdAlta, which has matched the BTB funding. The BTB program is a A$22.3 million initiative of the Australian Government’s Medical Research Future Fund (MRFF) that is managed by MTPConnect to develop innovative health and medical research ventures to reach commercial proof-of-concept.

†AdAlta Limited is an Australian-based drug development company headquartered in Melbourne which is using its proprietary technology platform to generate a promising new class of protein therapeutics, known as i-bodies.