Eye movements may be key to chronic fatigue syndrome diagnosis 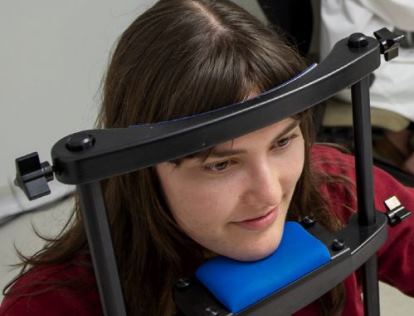 Oculomotor testing in the lab.

Associate Professor Joanne Fielding, from the Department of Neuroscience, is being funded  by the Judith Jane Mason & Harold Stannet Williams Memorial Foundation (the Mason Foundation) through Equity Trustees to conduct a project identifying objective behavioural markers for this debilitating disorder. Associate Professor Fielding is working with Dr Scott Kolbe and Dr Meaghan Clough , both from the Department, and co-investigator Dr Chris Armstrong from the University of Melbourne on the project.

An enigmatic disorder, ME/CFS is characterised by extreme tiredness, pain and a range of other symptoms. Remarkably, there is currently no reliable way to diagnose it and to objectively monitor the effect of treatment in people with the disorder.

“You can’t directly measure ME/CFS at the moment. A clinician’s role is to essentially eliminate other potential causes for the constellation of symptoms,” Associate Professor Fielding said. “While there are some suggested diagnostic criteria there are no formal criteria.

“What we’re trying to do is generate a unique ME/CFS signature based on characteristic changes to eye movements, a behaviourial signature that is specific to the disorder that can be used to help diagnose it and monitor the effects of any treatments.”

“We’re using video-oculography, which is basically high-powered cameras that record the eye movements in response to a set of simple stimuli on the screen.

“People with ME/CFS are typically extremely fatigued – we need something very quick that gives a snapshot of how they’re performing.”

Participants in the study can be tested in the lab or in their own homes with a portable eye-tracker – helpful to someone with such a disabling disorder.

Associate Professor Fielding said the research might also give the scientists clues about what might be happening neuropathologically in ME/CFS.

“Tentatively, what we’ve found already looks like a set of aberrant eye movements that suggest that something might be going on at the level of the brain stem – but it’s early days and that’s at best, speculative,” she said.