AFL players with concussion returning to play too soon: study 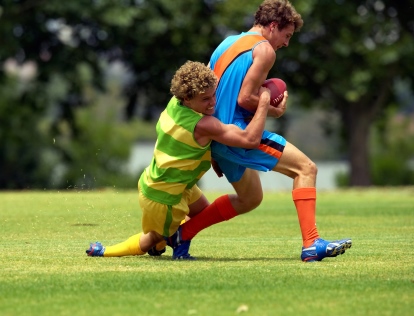 A Monash University study of amateur Australian rules footballers has found the brains of players are still recovering two weeks after receiving a concussion, calling into question the length of existing recovery guidelines.

Read story published in The Age

The Monash researchers found two new biomarkers that can help sports doctors tell when an athlete’s brain is fully recovered post-concussion.  They then tested these biomarkers in a cohort of amateur men’s and women’s Australian rules players and found there remained significant changes in brain function after two weeks - indicating it had not yet fully healed.

The study, published in the journal Sports Medicine Open, raises further concerns around sports-related concussion guidelines that allow players to return to competition 12 days after they have been concussed. .

There is increasing concern that repetitive sports-related concussion can have serious neurological consequences, particularly when the repetitive injuries occur when the brain has yet to fully recover from the initial injury.

The research team led by Associate Professor David Wright, from the Monash Department of Neuroscience, used MRI to measure structural changes, oxygen consumption and blood flow in the brains of concussed male and female amateur Australian rules athletes. The 13 athletes in the study underwent MRIs after being cleared to return to play following a mandatory 12-day recovery period. They were compared to a group of 16 control group Australian footballers who had not had a sports-related concussion for the previous three months or more.

Despite the concussed Australian footballers being cleared to return to play at the time of MRI, the study found evidence that the athletes’ brains had not yet fully recovered.

Further, there was evidence of a mismatch between oxygen demand and supply in the brain and this appeared to be more disrupted in recently concussed female footballers.

According to Associate Professor Wright, there is an increasing number of promising biomarkers that have been developed with the aim of objectively determining recovery after a sports-related concussion.

This is the first study to investigate oxygen consumption and cerebral blood flow in Australian rules footballers.

“Our findings suggest that more research is needed to understand the short and long-term effects of sports-related concussion and advanced brain imaging methods, like those used here, may help doctors better understand the timeline for recovery following concussion,” Associate Professor Wright said.

Read story published in The Age