While treatments for HIV mean that the disease is no longer largely fatal, the world still lacks a true therapy that can eradicate the virus across a globally – and genetically different – population.

Monash researchers, together with colleagues from the Pasteur Institute in Paris, have discovered a unique set of “super” receptors on immune cells capable of killing HIV across genetically diverse populations, making them a potential candidate for immunotherapy treatments. The work was published today in Science Immunology.

Associate Professor Stephanie Gras and her team from Monash University’s Biomedicine Discovery Institute (BDI) and ARC Centre of Advanced Molecular Imaging, and her colleagues from the Pasteur Institute in Paris, studied fifteen unique individuals who all had been infected with HIV (ANRS CO21 CODEX cohort), but have immune systems that protect them from AIDs progression. These rare individuals, called HIV controllers, could hold clues to the cure for the disease.

Upon HIV infection, CD4 T cells, which are an important part of our protective immune system, can be depleted and drop dramatically in numbers, leading to a weak immune system with the progression of the disease to AIDs. These CD4 T cells can remain low even when the disease is kept in check with anti-retroviral therapy (ART), which is currently provided to more than half of people living with HIV globally. ART lowers the risk of mortality but does not eradicate the virus.

Associate Professor Gras and her colleagues found that HIV controllers are able to retain CD4 T cells of a higher quality, and are able to detect and react to minute amounts of virus, therefore representing a great opportunity to study their potential role in HIV infection.

“We discovered that those CD4 T cells, usually viewed as helper cells for the killer CD8 T cells that destroy infected cells, could be turned into killer cells themselves in HIV controllers. These killer CD4+ T cells could recognise very low amounts of HIV thanks to the expression of “super” T cell receptors on their surface. Importantly when they studied these receptors – they found identical receptors across multiple HIV controllers,” Associate Professor Gras said.

“The likelihood of finding the exact same T cell receptor in different individuals is extremely low, like winning the lottery, and is likely playing a role in the control of HIV” Monash BDI’s Dr Carine Farenc, a co-lead author of the study said.

Monash University researchers used the Australian Synchrotron, effectively a giant microscope the size of a football field, to study the binding of this super T cell receptor in complex with the HIV antigen. This revealed another remarkable feature of those killer CD4 T cells:  their ability to recognise HIV fragment in genetically diverse individuals (with different HLA molecules).

The Gras team and their colleagues found that these killer CD4 T cells can bind with HLA molecules shared by a quarter of world population, a figure that is likely to increase as studies progress, according to Associate Professor Gras.

Statistics (from the World Health Organization): 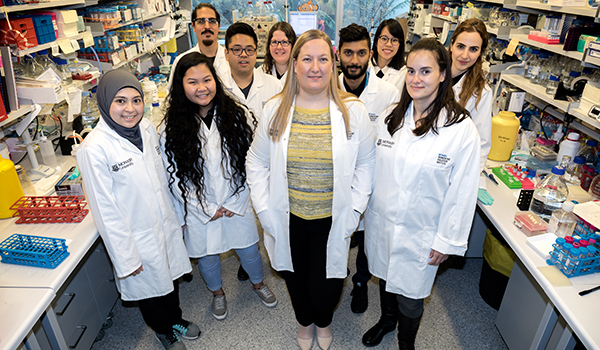 Associate Professor Stephanie Gras and the members of her lab.