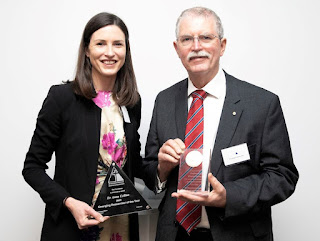 The 2022 Bethlehem Griffiths Research Foundation medal has been awarded to Professor Elsdon Storey AM, a giant of neuroscience and an international research visionary and clinician, at a ceremony last week.  The many dignitaries and colleagues present had one thing in common, a deep respect for a humble but deeply gifted man who led with integrity, compassion and intellectual rigour.

One-time student and now colleague, Professor Michael Fahey, who presented the medal to Professor Storey on behalf of the Bethlehem Griffiths Research Foundation (BGRF) said that Elsdon’s humour and willingness to listen were a key to his high-standing with patients, colleagues and students. "His generosity to educate and inspire has germinated innumerable clinical, academic and research careers," Prof Fahey said.

Associate Professor Anne Powell, Training Program Director of Physician Education at Alfred Health, said, "We still use Elsdon's videos in our physician training as they are outstanding. Especially memorable for me is the one hour he explained the complexities of the genetics questions for our trainees."

As a young man, Elsdon duxed Scotch College Melbourne before graduating first in his medical class of 1978. He then progressed as a Rhodes Scholar obtaining a Doctor of Philosophy from Oxford University in 1986.

After a fortuitous route through other areas of medicine, we were lucky to welcome him back in Melbourne working as a joint clinician and researcher in neurogenetics (especially the hereditary ataxias) and behavioural neurology (particularly the dementias).

Professor Storey was appointed as the first Van Cleef Roet Professor of Neuroscience at Monash University in 1996 and was also Head of the Alfred Neurology Unit. He has been awarded many honours and held a large range of leadership positions including the Board of the BGRF, Neurology Co-Editor of the official journal of the Council of the Australian and New Zealand Association of Neurologists, and the Boards of the Brain Foundation and Neurosciences Victoria amongst others.

Accepting the award, Professor Storey gave a moving pre-recorded speech, that may prove to be yet another outstanding and selfless contribution to neuroscience. Suffering from the effects of Parkinson’s disease, Professor Storey shared invaluable observations about his decline that may just provide the impetus, motivation and insights to progress the treatment and understanding of this insidious condition.

In the 2022 Australia Day Honours, Professor Storey was appointed a Member of the Order of Australia for "significant service to medicine in the field of neurology, and to professional associations".

The BGRF awards this medal and a $5,000 gift for an outstanding contribution to clinical research in progressive neurological disorders, stroke or palliative care. True to form, Professor Storey donated the prize money straight back to the Foundation. Past winners of the medal include the cream of Australia’s research professors.

In addition to this medal the Bethlehem Griffiths Research Foundation also recognizes our best and brightest young researchers destined to be future leaders in medical research at the same ceremony.
Professor Jennifer Philip awarded the 2022 Emerging Researcher of the Year award on behalf of the Foundation to palliative care researcher, Dr Anna Collins. A Senior Research Fellow in the Department of Medicine, St Vincent’s Hospital, University of Melbourne, Dr Collins leads the public health and health services research programs for the Palliative Nexus Group.

The Bethlehem Griffiths Research Foundation was established in 1994 through a generous bequest from the estate of the late Mr Glen W A Griffiths, in appreciation for the care he received at Calvary Health Care Bethlehem. His will provided for the establishment of a foundation, independent of the hospital, to fund Victorians researching life-threatening neurological illnesses such as multiple sclerosis and MND as well as palliative care and stroke. New methods of treatment resulting from the $6.5 million plus provided since it commenced are now used routinely to alleviate suffering.

Enquiries: Julienne Lewis CEO, Bethlehem Griffiths Research Foundation on 0409513443 if further information is needed on the Foundation or winners.