A newly-funded project led by our Cancer Research Program is set to determine whether patients with advanced gastric (stomach) cancer in Victoria are all being tested for HER2 status using the recommended criteria at the time of their diagnosis. This may result in more patients being diagnosed with HER2-positive tumours, and hence more patients being eligible for treatment with targeted drug therapy, offering potentially better outcomes.

Nearly 2,400 Australians were diagnosed with gastric cancer in 2021, and people newly diagnosed with the illness have a 34 per cent chance of surviving at least five years.1 Many early symptoms of gastric cancer, such as indigestion, can be overlooked, as these problems occur so commonly. This contributes to a frequently seen pattern of patients presenting with advanced-stage cancer at diagnosis.

However, research has found a particular genetic change in around 15 to 25 per cent of advanced stomach tumours. The HER2 gene encodes proteins that coat cancerous cells. Drug therapies that disrupt HER2 protein function can often be helpful in treating the cancer or slowing spread, increasing longevity.

But a review of patient records of people diagnosed with advanced gastric cancer at a Victorian hospital revealed that only eight per cent of tumours tested showed positivity for over-expression of HER2, leading researchers to believe that not all patients are being appropriately tested for HER2 status. Those who are missed may benefit from targeted drug therapy. 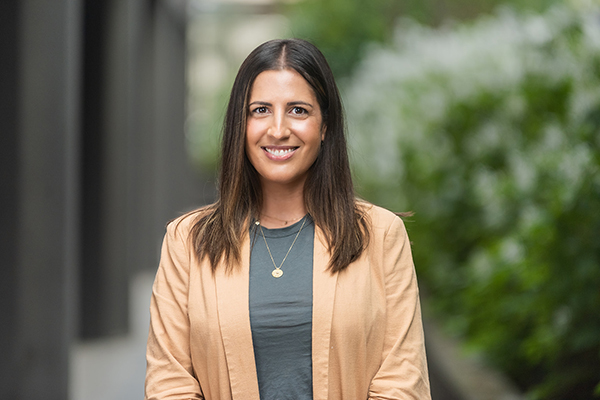 The study – funded by the Victorian Cancer Agency – was conceptualised by clinician-researchers based at Monash University’s School of Public Health and Preventive Medicine, and the Alfred Hospital.

Dr Liane Ioannou leads the current study. She says, “The discrepancy between hospital records and what they expected to see going by medical literature struck them as a worthwhile place to investigate. The pathologists at the hospital reviewed all the pathology samples over the previous 12-month period, to see how many biopsy samples were used at the point of diagnosis.

“Doing so revealed a procedural issue that was impacting testing. This is actually quite good news, as it means we can improve this via process change and education.”

When a doctor wishes to exclude or confirm a diagnosis of gastric cancer, the patient is sent to a gastroenterologist for biopsies. This requires a gastroscopy performed as a day procedure. At that point, the gastroenterologist usually has a single goal in mind – taking a sufficient sample to allow a definitive diagnosis of cancer. Two or three is usually enough.

Unfortunately, the subsequent step of classifying the cancer as HER2 positive or negative requires a minimum of five samples. Because of the logistics associated with repeating the biopsy procedure, patients are generally not sent back for another. It’s only subsequently that the treating team may learn that the patient has advanced disease and would benefit from definitive assessment of the tumour HER2 status.

Dr Ioannou says, “The findings led to an informal survey of local gastroenterologists, medical oncologists, gastric surgeons and pathologists, to establish how well they understood HER2 testing guidelines, processes, and availability of testing. We found very mixed results.

“This newly-funded three-year study will help provide more robust evidence around the awareness and use of these guidelines. We’re planning to conduct a formal review of HER2 testing across ten Victorian hospitals that manage high volumes of patients with advanced gastric cancer. This will include reviewing pathology slides and medical records from those sites. This will give us a much better picture of what currently happens in Victoria.

“We’re also investigating barriers and enablers to system change in this space, so once we have clearer evidence of any issues with current practices, we’ll be able to make effective recommendations on how to drive policy and practice change consistent with the guidelines.

“These recommendations could then be shared by peak medical bodies such as the Australian & New Zealand Gastric and Oesophageal Surgery Association, the Royal College of Pathologists of Australasia and the Gastroenterological Society of Australia, as well as consumer organisations such as the Pancare Foundation.

“This project gives me a lot of hope. Giving patients with advanced gastric cancer patients the best shot possible at improving survival is certainly something I’m keen to be involved in.”