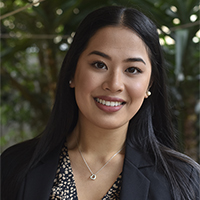 Why did you decide to study science?
I am filled with awe and wonder when I look at the natural world. It is magical that life is possible, and science is my way of investigating how it came to be. Humans are a bunch of atoms engaging in spontaneous chemical reactions that lead to cells forming, those cells then become organs which help to create a body. But somewhere along the way, life happens. Consciousness and our our souls arise. Our humanity and who we are forms somewhere in that hierarchy, which I find incredible.

What made you choose Monash Uni in particular?
I chose Monash because of its flexible double degree structure. When I graduated high school, I wanted to study something in the biological sciences, but I also loved English language and linguistics. Monash’s double degree in Science and Arts has allowed me to explore both avenues of my academic interests without forcing me to pick just one before I was ready to.

What's your favourite aspect of studying science?
There is always more to learn! I am a naturally curious person, who likes to know the details of how everything around me works. I’ve been a little disappointed in the past when researching some biological process, only to find that the finer details or exact mechanisms of that process haven't been characterised yet. It has been extremely rewarding and fulfilling to be part of the research programs at Monash. It has helped me to acknowledge that we can be the people that discover the processes which underpin life and development and push the boundaries of human knowledge. I also really enjoy interacting with the incredibly supportive educators and researchers here who hold such a wealth of interdisciplinary knowledge and are an invaluable resource to the next generation of scientists.

What has been the highlight of your science degree so far?
Studying Developmental Biology as a major has been the best experience of my entire academic career, however the Fundamentals of Developmental Processes unit offered unit offered in third year has to be the true standout. This unit covered the molecular mechanisms of development, including the specific genes which have to turn on to form a limb, for example. We learnt about how and why many of the model organisms we use in research look exactly the same as human embryos in embryogenesis due to a shared evolutionary history. The practical exercises in this unit included chick microsurgery to study the impact of removing certain structures on limb development and cutting a Planarian worm in half. For nature lovers, don’t worry, the worms have an incredible ability to regenerate themselves into two new worms after being separated! I had such a wonderful time in that unit, which led me to join the outstanding unit convenor, Associate Professor Craig Smith’s research lab to study gonadal sex determination and limb development in the avian model – where you will still find me today, happily opening eggs and performing chick or quail microsurgery.

What's the biggest misconception you had about studying science before you started your course?
I originally thought that scientists were all super serious and closed-off, but after interacting with the Genetics and Genomics teaching staff and the researchers around the lab at the Department of Anatomy and Developmental Biology, I couldn’t have been more wrong! They are a kind and caring bunch.

If you were to give some advice to someone who's thinking about studying at Monash Science, what would you say?
I’d say go for it – and study Developmental Biology!

Give us a life hack or piece of advice you live by:
Sometimes I get down on myself for not doing enough study in a day, or sad and disappointed when my experiments fail. I have a bad habit of panicking when things don’t go to plan, and the phrase 'you can try again tomorrow’ have always been enough to bring me back down to earth. Also, the realisation that I will never miss out on the things that are meant for me has been of great comfort when I don’t feel good enough.

On a less philosophical note, if you take public transport, set your Myki to auto top-up. I never have to worry about how much money is on my card or scramble to find a Myki machine when I’m running to catch the train!

Have you got the Edge?