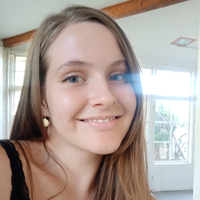 What made you choose Monash Uni in particular?
I originally chose Monash because it was one of the only universities in Australia where you could study Korean, however I gave it up and changed degrees after one year so you could say studying science at Monash was not my intention when looking at universities at all, however I’m very grateful I have ended up where I am.

What's your favourite aspect of studying science?
I love studying science because it helps me build an understanding about how and why the world works in the way it does.

What do you plan to do when you graduate?
After I graduate, I plan to continue into post-grad study with the goal of becoming a clinical psychologist one day.

What has been the highlight of your science degree so far?
The highlight of my degree so far has been living on-campus. Moving states and not knowing anyone at the start of first year was very daunting, however being in halls surrounded me with people who were in the exact same situation, so in a way we were able to help each other out.

What's the biggest misconception you had about studying science before you started your course?
I always had this idea that university was hard- like really hard. I guess leading up to the start of my studies I was afraid that I was not ready to enter what I thought was the ‘adult world’ and that I would not be up to scratch. Obviously, it was not like that at all, everyone in my course was in the exact same position and it helped me realise that I was not out of place at all.

If you were to give some advice to someone who's thinking about studying at Monash Science, what would you say?
My advice to anyone thinking about studying science at Monash would be to go for it. Studying at Monash is amazing, there is so much support and the environment on campus is a dream. There are so many events and opportunities to make friends and get involved, and it’s located in Melbourne- one of the most liveable cities in Australia.

Give us a life hack or piece of advice you live by:
My advice that I try to live by is to always be happy within yourself and enjoy spending time alone. This is because at the end of the day you’re the only one who you’re going to spend your entire life with from start to end, so it’s vital to be at peace with yourself.