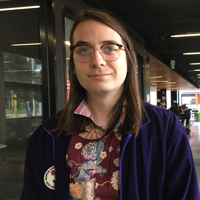 Why did you decide to study science?
I knew coming out of high school I was really interested in the human body and how it worked, but knew I also wanted to try other schools of science. The ability to really explore what was out there in the universe made it a clear choice.

What made you choose Monash Uni in particular?
Monash’s Bachelor of Science allowed me to go in different directions, and sort of follow what I liked from first year and see where it took me. The degree is really flexible, and it meant that I could do what I like without being forced into a particular school of science exclusively. It also gave me the option to take on a Double Degree if I wanted and Monash had a great campus culture which was really important to me.

What's your favourite aspect of studying science?
It’s a cheesy answer, but its definitely been the people I’ve met. People within the science degree have a real cause and passion behind their studies, and that's certainly driven me forward with them.

What do you plan to do when you graduate?
After I finish off my undergraduate degree, I’ll move onto Honours, which I’m undertaking through Monash’s Central Clinical School. I'll be doing research into how the brain and the nervous system talk to each other in hypertension.

What has been the highlight of your science degree so far?
I get the opportunity to do some really amazing things through this degree. I had the opportunity to view a foetal surgery in my final semester and that has topped everything before it.

What's the biggest misconception you had about studying science before you started your course?
That everything would be really serious. My academics and fellow students have been nothing but welcoming and kind.

If you were to give some advice to someone who's thinking about studying at Monash Science, what would you say?
If you are worried that a science degree will limit future prospects, just know that science graduates end up in all sorts of industries and in all sorts of roles. If you love science, then follow science.