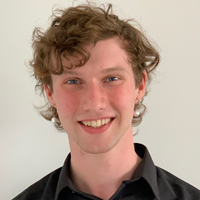 Why did you decide to study science?
I have always had a passion for science, stemming from an innate interest in how things work, which meant being told to stop fiddling with stuff a lot as a child. Studying science at university was the logical next step in this curiosity: a chance to understand deeper why things work the way they do.

What made you choose Monash Uni in particular?
I have known for quite a while that I wanted to study Biomedical science and science, which left me with the only real options of Monash or Melbourne. From there it was an easy choice: the university whose campus I had been going to for years for various events, and that had a friendly, homely atmosphere while also maintaining a high level of education, or a university that intimidated me in every regard, from the competition to the atmosphere.

What's your favourite aspect of studying science?
It scratches the hypothetical itch that is my curiosity about how things work, giving me a deeper understanding of, in my case, why people behave the way they do, and what we can do to help.

What has been the highlight of your science degree so far?
The cohort: one of my biggest fears coming out of a school that I’d attended for 16 years was making a new group of friends, but the science cohort is so incredibly lovely and friendly. Plus, there’s plenty of opportunities for social activities, which further facilitates making new friends.

What's the biggest misconception you had about studying science before you started your course?
I had a picture in my mind of science classes being stuffy, tedious procedures that people just suffered through because they had a goal in mind. Starting my course, however, I have found every class to be new and fresh, with active involvement from students in every single one of them. Far from the drudgery I had imagined. The facilities certainly are not dusty backrooms either.

If you were to give some advice to someone who's thinking about studying at Monash Science, what would you say?
Strongly recommend studying at Monash, but that it’s ultimately down to what they’re interested in and their options. If say you had a passion for physics, and you got into MIT, of course I’d say take the opportunity! But for a Victorian based university, you definitely can’t go wrong with Monash, especially with science.

Give us a life hack or piece of advice you live by:
If everything ever feels like too much, just take life one step at a time, tackling tasks as they become important.