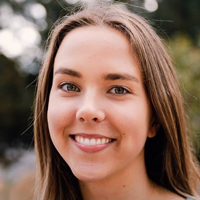 Why did you decide to study science?
I have always been an incredibly curious person, and I think I subsequently wanted a degree which helped to foster that. Science is exciting in that it is continually changing, alongside exposing new ways of doing things. I think in our increasingly globalised world, the skills of adaptation and creativity are so integral - hence why I chose to study in a field incorporating both!

What made you choose Monash Uni in particular?
Alongside being a leader in science, Monash is a leader in its on-campus culture for students. The opportunities allowed by 114 different clubs and societies, alongside a range of events, initiatives and campaigns were unparalleled to any other university I visited. I also particularly loved the idea of combining two degrees, which Monash had a range of options for.

What's your favourite aspect of studying science?
I love that science continually challenges and excites me - it’s such a dynamic field that ensures that my creativity is frequently tapped into. More importantly though, Science is one of the key drivers behind positive social change - a key factor for me when considering a long-term profession.

What do you plan to do when you graduate?
Good question! Following graduation, I hope to spend a year travelling and possibly conducting some overseas internships. I hope to gain as much experience in as many professions as possible, so that I have a clear idea of which path I’d like to follow! Also - conducting science in Germany sounds pretty good.

What has been the highlight of your science degree so far?
Being involved in as many things as I can! There are so many fantastic opportunities at Monash, which aren’t comparative to anything you experience post-graduation. A few favourites have to be the Monash Science Society, the Science Future Leaders program and being a representative of Monash Student Association.

What's the biggest misconception you had about studying science before you started your course?
That it’s all labs, mathematical equations and blowing up things - 3 components which are definitely integral, but not at all the extent of the field! It has been incredible to go down the Environmental Science path, which has incorporated so many different aspects of study. Field trips, analysing the legal side of environmental science and meeting like-minded, passionate women in STEM have definitely been highlights.

If you were to give some advice to someone who's thinking about studying at Monash Science, what would you say?
Massive yes! The range of opportunities, campus life and facilities (e.g. The Jock Marshall Reserve & Science Student Learning Lounge ) doesn’t compare to any other university. Where else can you go from your 12pm biology lab to an on-campus performance by Lime Coridale?

Give us a life hack or piece of advice you live by:
Lean into discomfort - if there is an opportunity that you’re holding back from because it’s daunting, go for it! Often, that discomfort is where you encounter the most growth. The benefits and experiences you will gain from stepping outside of your comfort zone are always far greater than missing out.