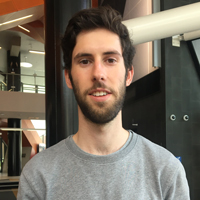 Why did you decide to study science?
I chose to study science because I liked the idea of having work aimed at practical applications. Science had both academic and practical skills, and I thought a background in an area that aims to solve some of the complex problems facing the world would be interesting.

What made you choose Monash Uni in particular?
Primarily because Monash was the only university I knew that had a course like the GC science course. The opportunity for extra experiences outside of my normal science units and being part of a small cohort appealed and was the highlight of being at Monash.

What's your favourite aspect of studying science?
My favourite part of studying science is being able to interpret information from a lot of different sources and being able to distil it down to a core logical piece that is meaningful to whatever is being done. Be it interpreting data from a lab, investigating the literature to meet someone’s needs or creating a tight presentation, I feel satisfied when I can bring clarity to complex ideas.

What do you plan to do when you graduate?
Difficult to say, I have a lot of different interests and they aren’t necessarily all science. While I walked into first-year uni thinking I knew what I wanted to do I will walk out without a clear aim of what I want to do for a career. I don’t think this is a bad thing as I have had time to think about what sort of things I like doing. After a bit of travelling, my main goal after graduation is to find a job that is different everyday and has some practical elements. I also want to learn to glide.

What has been the highlight of your science degree so far?
The highlight has definitely been my Honours year, being able to come into our course’s office everyday and spending time with my course mates has been a really fun year.

What's the biggest misconception you had about studying science before you started your course?
That studying science means there is no opportunity to study other things. In reality there are plenty of elective spaces that mean science students can take units from other faculties. One of my favourite units was a second-year foreign policy unit which I found really interesting seeing a different way of thinking. Knowing that I would not be restricted to just core science units and could explore other subjects just out of interest would have made choosing a science degree a much easier choice.

If you were to give some advice to someone who's thinking about studying at Monash Science, what would you say?
Go for it, there are heaps of different science fields that are all quite different and chances are you will have the chance to still pursue other subjects on the side as well. My one recommendation would be to study chemistry, even if you dislike the idea of it. I managed to go through school and university without ever studying it, however, it seems to be fundamental to almost every other unit of science. In hindsight learning the basic of chemistry would probably have made final year units more intuitive.

Have you got the Edge?