Monash Scientists have won almost ten per cent of funding announced yesterday by the Australian Government’s energy agency to propel innovation in exporting renewable hydrogen to the world.

The Australian Renewable Energy Agency (ARENA) has awarded $22.1 million in funding to 16 research projects including two at Monash University to a team in the Australian Centre for Electromaterials totalling $1,970,057.

The funding has been awarded to research teams from nine Australian universities and research organisations. The early stage research projects cover a diverse range of renewable solutions, with at least one project from each point in the supply chain – production, hydrogen carrier and end use. 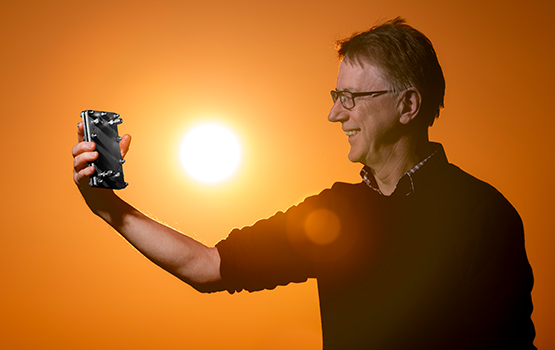 “This is an exciting development for the Monash Faculty of Science,” said Monash Science Dean, Professor Jordan Nash.

“Energy is one of the key challenges society faces, and we welcome the opportunity to be involved in this renewable energy revolution,” he said.

Monash Science and partners* will receive $915,848 for a project led by ARC Laureate Professor Doug MacFarlane from the Monash School of Chemistry. This project will focus on ammonia production from renewables at ambient temperature and pressure using just water and nitrogen from the air around us.

“Ammonia is emerging as an ideal renewable energy storage vehicle that is suitable for large scale export,” said Professor Doug MacFarlane. “The funding support will allow us to assemble a world-class team to bring this important technology to the next stage of commercial readiness,”

“Australia has a pre-eminent position in the world in regard to the potential for large-scale generation of renewables and this technology will provide a ready means of transportation of this hydrogen energy to important markets in Asia.”

Hydrogen – or hydrogen carriers like ammonia – are potentially ways for Australia to export renewable energy. Electrical energy can readily be converted into hydrogen via electrolysis. Renewable or green hydrogen involves producing hydrogen from renewable sources, for example via electrolysis powered by solar and wind.

Hydrogen is poised to play a larger role, as the world moves to a low carbon economy. Hydrogen can also be used as a way for Australia to export renewable energy to other countries, particularly in Asia where demand is expected to rapidly increase as these economies progressively move to zero-carbon fuels.

Dr Simonov, also from the Monash School of Chemistry, said renewable energy storage and export as hydrogen or in hydrogen carriers such as ammonia had enormous export potential for Australia.

“This funding will allow us to push down the costs involved in our device that extracts hydrogen from water,” he said. “The involvement of AGL supports a key feature of the project directed towards integration of renewable hydrogen into existing energy networks.”

“Both projects represent an exciting opportunity to maintain the leading position that our Australian Centre of Excellence for Electromaterials Science has in renewable fuels, accelerating progress towards large-scale, practical devices.”