Scientists have long known that the Universe is expanding, but determining whether the expansion rate is the same in different parts of the Universe has been unclear.

A new study by Monash astrophysicists published in The Astrophysical Journal Letters has provided fresh insights on understanding the expansion of the Universe.

“Measurements of how quickly different parts of the Universe expand, is currently the subject of much debate,” said lead author, Hayley Macpherson, a PhD candidate at the Monash School of Physics and Astronomy.

“For the first time, we have been able to show, by solving Einstein's equations of General Relativity on a supercomputer, that local variations in the expansion rate of the Universe are extremely small.” 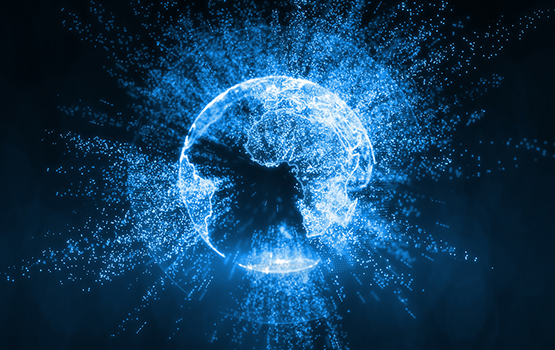 Previous simulations model this structure formation using Newton’s law of gravity and prescribing the way the Universe expands. The researchers measured the rate at which space expands at different physical locations due to variations in the local structure, for example from large clusters of galaxies. In Einstein’s theory of gravity, galaxy clusters curve space, which changes the rate at which the Universe expands in those local regions.

“In our computer simulations, the expansion of the Universe occurs naturally because we solve Einstein's equations,” Hayley said.

“This allows us to measure, for the first time, how the formation of super-structures affects the expansion rate of the Universe.”

Currently, two separate, precise observational measurements of the Hubble constant, or expansion rate, have been made.

One is based on measurements in the local Universe, giving a value of 73 km/s/Mpc while the other measurement is based on the afterglow of the Big Bang, known as the Cosmic Microwave Background, giving 67 km/s/Mpc.

The disagreement has been termed `the trouble with Hubble'.

“Local differences in the expansion rate, due to super-structures, have been suggested to explain this tension,” said study co-author Associate Professor Daniel Price, from the Monash School of Physics and Astronomy.

“In our study, we showed that local variations in the expansion rate are not enough to explain the discrepancy between the two measurements, further deepening the mystery,” added fellow study co-author Dr Paul Lasky, a senior lecturer at the Monash School of Physics and Astronomy.

“We found that these local differences in the expansion rate of the Universe, caused by nearby galaxy clusters, are unlikely to explain the tension between the two measurements of the Hubble constant.”