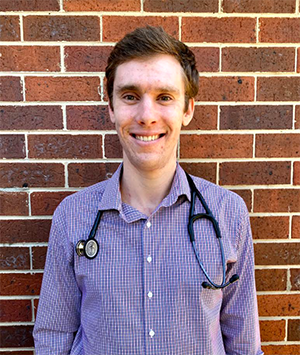 Michael McLure was just seven months old when he had his first anaphylactic event. While he can’t really remember it, he’s heard his family recount the dramatic story many times. Living with the peanut allergy that triggered the episode has subtly influenced his life ever since, and now he’s made his first foray into medical research with a project looking at anaphylaxis guidelines around the world.

Whilst death due to anaphylaxis is rare, the lifetime incidence is high, and the World Allergy Organisation says the general population has a 1.6% chance of developing symptoms. The time-critical nature of anaphylaxis demands that clear and succinct clinical guidelines be available to physicians for direct management. However, a 2007 study found significant variation among treatment guidelines, and a lack of disclosure of the strength of evidence underpinning them.

Under the supervision of cardiac researchers A/Prof Janet Bray and Dr Kathryn Eastwood, Michael conducted a rapid review of Australian and international treatment guidelines for anaphylaxis in the hospital setting. He sought to identify any major discrepancies in treatment between guidelines, and significant new recommendations from the last five years that might influence guideline creation in the future. The results have just been published in high-ranking journal Resuscitation.

His own personal experiences growing up under the cloud of anaphylaxis drew him to the project. He says, “Having a severe food allergy certainly doesn’t dominate my life, but it does occupy some brain space. I have to be mindful of it when eating out, and it does add some anxiety to travelling, especially overseas.

“On the plus side, as a child I was brought up to question teachers, restaurant staff, friend’s parents and other adults about food given to me. Challenging authority figures can be quite daunting, so I think that’s given me the confidence to think critically and search for evidence, rather than just accepting things on trust. That’s in part why I found doing this study so fascinating.”

The review revealed some key variation between treatment guidelines both here and overseas, and it proved to be an eye-opener for Michael, one that will influence his clinical practice throughout his career.

“I was really surprised at the lack of evidence underpinning the guidelines. The sudden and life-threatening nature of anaphylaxis means it’s difficult to implement gold-standard trials like randomised controlled trials (RCTs), so most of the treatment guidelines are informed by observational data and mortality records. That’s obviously helpful, but without an RCT, it makes it hard to stratify patients into those that could benefit from one treatment more than another.

“It’s made me realise that the evidence beneath some clinical guidelines is quite shaky. Going into my first year as a junior doctor, I know I’ll be spending more time looking into the recommendations underpinning advice I give to my patients.”

Of the SIP placement itself, Michael says it surprised him.

“I went into it somewhat hesitantly, thinking that research wasn’t really my thing. My time with Janet and Kathryn has changed this! I’ve even taken on a job with Janet as a part-time Research Officer, doing a similar project on guidelines for burns first aid, and another looking at breathing tubes in paediatric patients.”