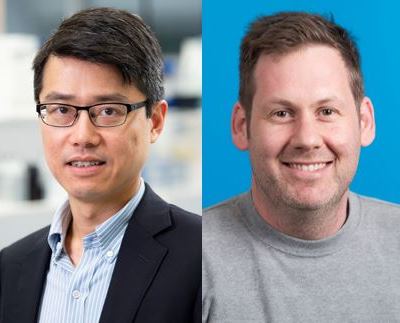 Congratulations to CIA Professor Patrick Kwan (pictured, left with CIB Dr Ben Rollo, right) and colleagues, who have been awarded a MRFF Stem Cell Therapies Mission grant for $556,460. This grant was part of a suite to support research on treatments for incurable disease announced by the Commonwealth Minister for Health Greg Hunt on 20 June.

Epilepsy is a severe neurological disease which affects over 70 million people globally. Despite a concerted effort to identify new anti-seizure medications (ASMs) over the last 25 years, epilepsy remains uncontrolled in 30% of individuals, a condition known as drug-resistant epilepsy. Therefore, there exists an urgent unmet clinical need to identify new effective drugs to treat epilepsy.

This project will take stem cells from both healthy individuals and those with drug-resistant epilepsy, and grow their stem cells in vitro into neurons. The researchers will test  the ability of a library of drugs to suppress the abnormal activities of these neurons. The process will enable rapid assessment of new effective drugs that target drug-resistant epilepsy at a speed and scale not possible with conventional animal methods.