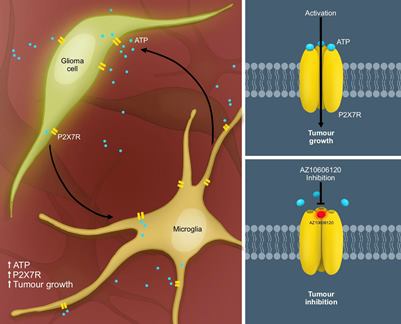 Bleak prognosis for glioma (brain tumour) patients may become brighter with the discovery of a compound that inhibits glioma growth in human tumour samples.

Gliomas are the most common cancers of the brain, accounting for 80% of all brain tumours. Among these, glioblastoma is the most aggressive form, killing an estimated 225,000 people worldwide per year with patients only surviving for a median of 14-15 months after diagnosis.

Importantly, current treatment options are limited to surgical removal, radiotherapy and chemotherapy, and only prolong survival by some months. Despite advances in treatment, the prognosis for glioblastoma patients remains bleak. There is a desperate need for the development of more effective therapies.

The P2X7 receptor (P2X7R) is a receptor protein commonly found on cells of the immune system. P2X7R is widely known to serve roles in inflammation, cell metabolism and cell survival. Interestingly, there may a potential link between P2X7R and glioblastoma growth.

In February 2020, a story by Anne Crawford reported on a new technique developed by Ms Liyen Katrina Kan, a PhD student in Dr Mastura Monif's research group, to culture fresh human glioblastoma tissue. Further work has just been published of experiments conducted by Ms Kan using a human glioblastoma cell line (U251) and tumour samples of patients who attended the Royal Melbourne Hospital.

First, Dr Monif and her research group demonstrated the expression of P2X7R in both tumour cells (glioma) as well as tumour-associated immune cells (microglia) (see figure above). Second, and more importantly, when the human glioblastoma cultures were treated with a synthetically manufactured compound known as AZ10606120, they found a substantial reduction in the number of tumour cells.

Ms Kan said, "We decided to use AZ10606120 in the experiments given that it is one of the most potent and specific inhibitors of P2X7R and that there was no statistically significant difference in tumour cell numbers after application of the other P2X7R antagonists (BBG and oATP) used. We wanted to see what the effects of AZ106 were compared to the other antagonists. Studies have tested AZ106 on a range of other cancers, but there are limited studies showing the effects of the compound on human primary glioma cultures, so we decided to test it out."

The blockade of P2X7R by AZ10606120 likely halts tumour growth by either preventing the activation of immune suppressing microglia (immune defence cells) or acting directly on glioblastoma cells. Additionally, the anti-cancer effect of AZ10606120 was found to be more effective than the conventional chemotherapy treatment, temozolomide, revealing its role as a possible drug for patients with glioblastomas.

Dr Monif said that the research "is very exciting as it brings promise for patients with glioblastomas and sheds further light on the role of P2X7R in these tumours. Our future endeavours will involve testing AZ10606120 in animal models of glioblastoma, which will hopefully lead to a phase I human clinical trial."

Funding provided by the Brain Foundation and Sylvia and Charles Viertel Charitable Foundation.