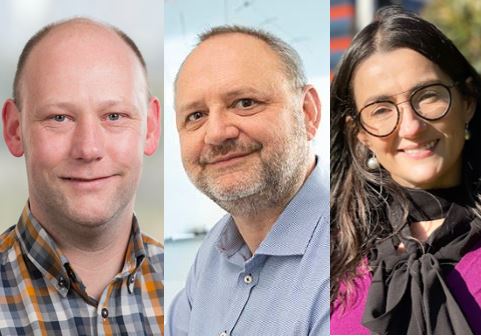 More than 50% of people living with multiple sclerosis (MS) experience cognitive problems as part of their disease. These cognitive problems subtly worsen with time and can be difficult to measure with standard neuropsychological assessments. Hence, it can be challenging for neurologists to monitor and detect small changes in cognitive function in day-to-day practice.

Monash researchers have developed a simple set of tests to detect subtle changes in cognitive function in people living with relapsing remitting multiple sclerosis (RRMS). The tests are collectively known as ‘MSReactor’.

Research fellow Dr Daniel Merlo, from the Multiple Sclerosis and Neuro-Ophthalmology research group in the Department of Neuroscience at the Central Clinical School (CCS) is first author on the study.

Dr Merlo said that the MSReactor tests measure reaction times, or speed in which a participant performs a cognitive task over time, on a tablet or computer and can be done from home. “We were able to develop ways to group people together according to their MSReactor results. We then could use this grouping or modelling of data to predict which people with MS would get  worse neurologically over time.” 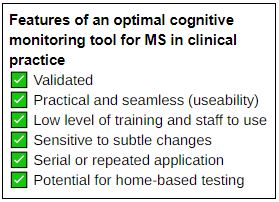 Dr Merlo said that, to date, not having hands-on tools that can be used to measure cognitive function, may prevent early and effective treatment choices that could help stave off cognitive worsening and improve daily living, at both work and home. “There are a number of features which are required for an optimal tool for screening cognitive changes in MS in clinical practice, which is what we developed in MSReactor. [See box].

MSReactor uses a computer-game type task  to assess cognitive function (e.g. visual attention, working memory and psychomotor function) in people with MS. The computerised tests can be done on any web browser, allowing people with MS to take these tests on their own at any time in the comfort of their own home, rather than needing to attend in-person in the hospital clinic.

Dr Merlo said, “To put the problem in perspective, MS is the most common neurological disease affecting young adults between 30 and 40 years old. MS affects more than 25,000 Australians and is on the rise.” He said that the most common type of MS is relapsing-remitting (RRMS) where new symptoms occur in isolated attacks (also known as a flare) which, if it recurs over time, can lead to permanent neurological deficits.

Their findings show that brief, computerised tests that measure memory and the speed that someone can process information can be readily scaled up and used in MS outpatient clinics. Dr Merlo said, “By analysing the reaction times collected from 460 people with MS and nearly 4000 MSReactor tests over time, we could identify a group of MS patients at greater risk of cognitive slowing and worsening disability.

“The key factors that increased the chances of being in this group of people who were gradually becoming slower included a slower reaction time at the start of the trial, older age and increased physical disability. Further, people with MS who demonstrated subtle worsening in performance trajectory in two of the MSReactor tasks (visual attention and working memory) were more likely to experience confirmed disability progression over time.

“Further understanding of how the MSReactor test results change over time with disease-modifying therapies, or with changes in daily activities in work environments, could change the way all people living with MS are monitored.”

Associate Professor Anneke Van Der Walt, senior author on the paper, is Group leader of the Multiple Sclerosis and Neuro-Opthalmology research group, Department of Neuroscience, Monash University and Director of the Multiple Sclerosis and Neuro Immunology unit at Alfred Health. A/Prof Van Der Walt commented that this work demonstrates that cognitive monitoring of people with MS can be achieved using simple tests in clinical practice.

She said, “It is important to remember that frequent cognitive testing is difficult to do as people often improve for a period due to learning and practising.

“Our novel approach demonstrates that very simple tests, using a computerized platform where infinite variations of the test can be presented, can detect subtle changes in cognitive function that the person with MS would mostly not be aware of."

A/Prof Van Der Walt continued, “This is really critical, as it may allow us to intervene earlier with complete physical and neuropsychological assessments, changing to more effective disease-modifying treatment options, and even cognitive rehabilitation.  These may all improve someone’s long-term outcome.

“MSReactor shows great promise as a tool to screen for subtle cognitive changes.  However, we need to do more work to understand how MSReactor will perform in people with different types of MS.

“People with more advanced or progressive MS may show a different performance pathway or trajectory.  We are also doing further work to understand how subtle changes in MSReactor task performance relate to work productivity and other real-life quality of life outcomes.”