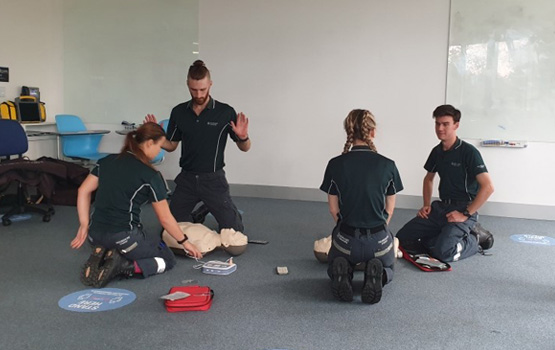 A Monash University study of cardiac arrests on university campuses and primary and secondary schools has highlighted the need for more publicly available and – importantly – findable – defibrillators.

Each year more than 24,000 Australians have a sudden out-of-hospital cardiac arrest. Survival rates are currently only around 10% but early cardiopulmonary resuscitation (CPR) and access to automated external defibrillators (AEDs) – designed to check and reset a heart to a normal rhythm – can boost survival rates to as high as 70%.

A new study by PhD. Scholar Brian Haskins, from the Monash Prehospital Emergency Care Centre of Research Excellence and the Department of Paramedicine, found that – while cardiac arrest in Victorian schools and universities between 2008 and 2019 were rare (131) compared to other public places (8906), the incidence of bystander assistance was much higher. The data was gathered from the Victorian Ambulance Cardiac Arrest Registry.

According to the paper, published in the journal, Prehospital Emergency Care, bystanders at schools and university provided bystander CPR to 95.5% of cases of sudden cardiac arrest compared to 78% in other public places.

These figures reduced dramatically when it came to the use of publicly available AEDs – 26% were used in schools and universities compared to close to 10% in other public places. This despite evidence that providing defibrillation within three to five minutes can produce survival rates as high as 70%, with “each minute of defibrillation delay significantly decreasing the person’s chance of survival,” Mr Haskins said.

A review by Ambulance Victoria of cardiac arrests in adults between 2000 and 2017 found an eight-fold increase in patients shocked by bystanders where the cardiac arrest occurred in a public place (from 2% to 23.5%).

Importantly the study found that compared to patients in cardiac arrest shocked by paramedics, those shocked in the first instance by bystanders had double the chance of surviving to hospital discharge (55.5% versus 28.8%).

The current study led by Mr Haskins found that the incidence of early defibrillation using an AED in schools and universities has risen from 4% in 2008-10 to 47.5% in 2017-19, compared to a rise of 4% to 15% for public locations over the same period. Lack of 24 hour publicly available defibrillators or knowledge of where one might be is preventing even further improvement in these figures.

Despite the majority of cardiac arrests at schools and universities occurring on sporting fields, largely out of office hours - according to Mr Haskins, AEDs are often only available 9-5, “because they are locked in a school office, for instance,” he said. “Or they are poorly sign-posted.”

One of the most widely used apps in Australia and New Zealand is GoodSAM, which Ambulance Victoria has integrated with its emergency call-taking and dispatch system, to alert GoodSAM responders of a nearby cardiac arrest. However, according to Mr Haskins, GoodSAM requires that AEDs are registered on the Ambulance Victoria AED Registry, so they can be quickly found in an emergency. “Even if they are registered the AEDs are often poorly signposted, which can cause further delays,” he said.

“Remember for best outcomes, you need to get an AED to someone within five minutes of them collapsing, so that means that it has to be 2.5 minutes away from a public place where a cardiac arrest might occur. So ideally you should already know where the nearest AED is, as looking for signs or using an app to find the nearest one loses precious life saving time.”

Mr Haskins also believes that many bystanders are reluctant to use an AED for fear of hurting the victim. A study by The Heart Foundation found 70% of adults would be willing to use an AED to help someone in an emergency, but only about one-third of respondents would feel confident doing so. To improve people’s confidence and knowledge of what to, Brian and the Department of Paramedicine have developed the HeartSmart Program, which provides free online CPR and AED use training.

“Everyone should be aware that it’s not possible to shock a heart that is beating normally, if someone has just fainted for instance then the AED won’t shock them,” he said.

“Importantly anyone can use an AED without training, all you have to do is turn it on and the device explains exactly what you need to do. Its such an important lifesaving tool and we need more people to know where they are and to be confident in using them.”

Register as a GoodSAM Responder

Register your AED on the Ambulance Victoria AED Registry