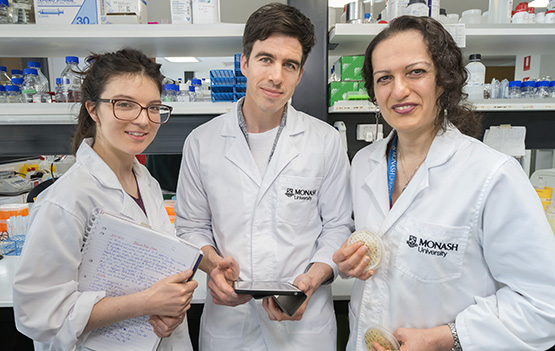 Monash scientists involved in one of the world’s longest evolution experiments have debunked an established theory with a study that provides a ‘high-resolution’ view of the molecular details of adaptation.

Many of the challenges facing the world today are the result of evolutionary processes.

“Cancer is an evolving group of cells within your body, antibiotic resistance is the result of bacteria adapting to the use of antibiotics, and climate change is forcing whole ecosystems to adapt or die,” said study co-lead author Dr Mike McDonald, from the Monash School of Biological Sciences.

“A major goal of modern evolutionary biology is to be able to predict or anticipate evolutionary changes,” he said.

“Our study, published in Nature, provides a high-resolution view of the molecular details of adaptation over substantial evolutionary timescales.

“The insights we provide into the rate, repeatability, and molecular basis of adaptation will contribute to a better understanding of these evolutionary processes and challenges.”

Dr McDonald, a recent ARC Future Fellow, specialises in the genetics of adaptation. To explore this area Dr McDonald’s lab propagates populations of yeast and other microbes such as E.coli for thousands of generations in a variety of laboratory environments.

Dr McDonald has been involved in the ‘E.coli long-term evolution experiment’ – an ongoing experimental evolution study now in its 30th year led by Richard Lenksi. This study has been following the genetic changes in 12 initially identical E.coli populations.

“The Lenski study is the longest running microbial evolution experiment with more than 67,000 generations of E.coli, which is equivalent to over one million years of human evolution,” Dr McDonald said.

“In our study we found that even though the E. coli populations in our experiment have been evolving in a very simple environment for a long time, they are still adapting to their environment.

“In other words the fit get fitter.

“But the established theory tells us that adaptation should have stopped by now since there should be a ‘fitness peak’” that the E.coli should have reached by now – and our work shows that this is not the case.”

According to Dr McDonald, one explanation is that as E. coli evolve, they change the environment that they are growing in. This change to the environment then drives further evolution, so that the populations may never stop adapting.

In his study, researchers undertook genome sequencing which allowed them to track over 33,000 mutations for 61,000 generations of evolution, providing them resolution they needed.

“This also gave us a comprehensive view of how repeatable adaptation is, and how random effects can affect the outcomes of evolution,” Dr McDonald said.