Named after engineer, military leader and public administrator Sir John Monash, Monash University was established by an Act of Parliament in 1958. When our first students began their studies at our foundation campus in Clayton in 1961, we became the first university established in the state of Victoria in over 100 years.

Monash has been breaking new ground for more than 60 years. Discover our diverse and colourful history. The early vision was to create a research-focused tertiary institution with an emphasis on science and technology.

As Monash has always done, though, we quickly moved beyond the bounds of expectation. Free from tradition and convention, we were within just a few years of our first intake of a mere 347 students, offering courses in arts, economics, education, engineering, law, medicine, politics and science.

The focus on research excellence remained, but what grew around it was a culture of creativity, innovation and irreverence. 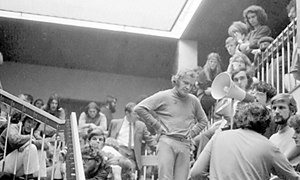 In the 1970s the foundation campus at Clayton became the centre for student protest in Australia, and this philosophy of challenging the status quo permeated the University. It remains to this day, although where once it was the Vietnam war and second-wave feminism that occupied activists' attention, today it is global poverty and sustainability, among many other causes.

This position of leadership was not only confined to campaigning and advocacy, however, and Monash had soon become the model for a new generation of Australian universities, with new models of clinical education in medicine and law.

The growth from technology/science specialists to general university was rapid. It was accelerated by a merger with Chisholm Institute in 1990, which saw the Caulfield and Peninsula campuses become a part of the University.

A year later the Victorian College of Pharmacy entered into a partnership with Monash that allowed us to bring Parkville into our portfolio of campuses.

The growth continued apace with the establishment of a new campus within the south-eastern growth corridor of Melbourne in 1994 - our (now former) Berwick campus. In 1998, the Malaysian Ministry of Education invited Monash to set up a campus in Malaysia in collaboration with the Sunway Group. Monash University Malaysia was established in the same year, the first Monash campus outside Australia and the first "foreign" university in Malaysia.

From 2001 until 2014, Monash University opened and operated a University in South Africa.

In 2001 Prato, Italy was added to the growing list of Monash campuses.

To underscore the reputation that the University had earned, in 1999 we were invited to be a founding member of the Group of Eight, the coalition of Australia's most prestigious research-intensive universities.

Monash had been around for just four decades, and yet was demonstrably holding its own against universities that had had well over a century to establish themselves. The New Horizons initiative is a platform for excellence in future manufacturing research and teaching.

From a single campus at Clayton with fewer than 400 students, Monash has grown into a network of campuses, education centres and partnerships spanning the globe. With well in excess of 60,000 students (and 350,000 alumni) from over 170 countries, we are today Australia's largest university.