The trouble with being a handsome bird 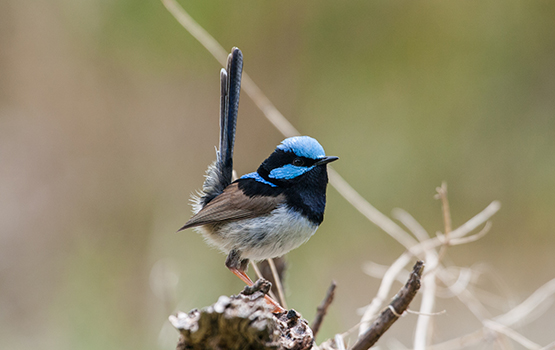 Male birds often use brightly coloured plumage to be attractive to females. However, such eye-catching trimmings may also attract unwanted attention from predators. Now, a new study led by Monash University has found that showy males indeed perceive themselves to be at a greater risk of predation.

This annual colour change makes them a useful study species for measuring the risk of being brightly coloured, as the behaviour of the same individual bird can be compared while he is in different colours.

As part of this study, published in the Royal Society Journal Proceedings B, researchers snuck up on unsuspecting fairy-wrens. They then broadcast fairy-wren alarm calls from portable speakers, and observed the behaviour of the birds.

“When birds hear such alarm calls, it tells them there might be a predator nearby,” says Alex. “Whether they ignore the alarm or flee to cover, and the amount of time taken to re-appear from cover, tells us how high they perceive their predation risk to be.

“We found that fairy-wrens were more cautious while they were bright blue: they fled more often in response to alarm calls, and took longer to re-emerge from hiding. They also spent more time in cover, and more time scanning their surroundings.”

Fairy-wrens go about in social groups, often made up of individuals in different plumage colours.

“When a blue male was nearby, fairy-wrens spent less time hiding in cover after fleeing in response to alarm calls, and devoted less time to keeping a look-out,” Associate Professor Peters said.

“This could be because the dull brown wrens view blue males as a colourful decoy that reduces their own risk, or because blue males are more vigilant, allowing the brown wrens to drop their guard.”

The study, which was done in collaboration with Professor Rob Magrath from the Australian National University (ANU), shows that fairy-wrens perceive themselves to be at higher risk when they display their bright blue plumage, and adjust their behaviour accordingly.