Professor Douglas MacFarlane and Dr Paul Lasky have been recognised for their outstanding contributions to research with the Australian Academy of Science awarding them the David Craig Medal, and the Pawsey Medal, respectively. 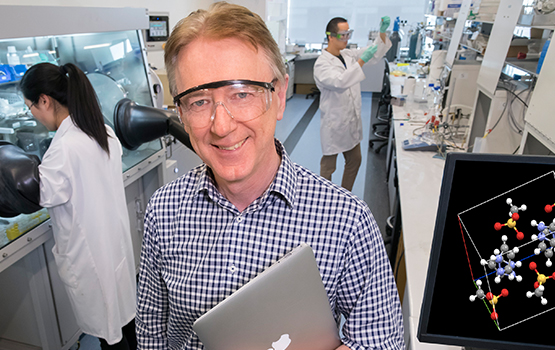 Dr Lasky is part of the international LIGO Scientific Collaboration team that has made worldwide headlines in recent weeks with the Nobel Prize in Physics being awarded to the architects of LIGO, and the discovery of gravitational waves from colliding neutron stars.

Professor MacFarlane is an Australian Laureate Fellow and leader of the Energy Program in the Australian Centre for Electromaterials Science. He is one of the pioneers of the field of ionic liquids and his research group continues to break new ground in this cutting-edge area of inter-disciplinary chemistry.

Congratulating the winners the Faculty of Science Dean Professor Jordan Nash, said the awards were testament to the exciting and often groundbreaking research underway across the Faculty.

“This award recognises the commitment and world-class calibre of our researchers,” Professor Nash said.

“We are extremely proud of Professor MacFarlane’s and Dr Lasky’s achievements,” he said.

Dr Lasky’s research encompasses many different aspects of astrophysics, particularly focussing on the most extreme regions of the Universe including black holes and ultra-dense stellar corpses known as neutron stars. He is making important contributions to the new field of gravitational-wave astronomy that is opening a new window on the Universe by detecting ripples in the fabric of spacetime that come from cataclysmic events in the distant reaches of the Universe.

Professor MacFarlane’s research focus is on Ionic liquids - a broad family of previously un-discovered new materials and media that are finding application in diverse contexts including batteries, solar cells, green solvents and medicinal chemistry. His research group together with collaborators in Australia and worldwide has contributed seminal work in all of these fields.

The Medals will be presented to Professor MacFarlane and Dr Lasky at a ceremony at the Australian Academy of Science in Canberra next year.