An internationally renowned chemist whose work is revolutionising Australian renewable energy exports, has been awarded the 2018 Victoria Prize for Science and Innovation in the physical sciences.

ARC Laureate Fellow Professor Doug MacFarlane from the Monash School of Chemistry is pioneering the development of a new class of chemicals called ‘ionic liquids’, which are now being used to create renewable fuel and fertiliser, and ‘green’ chemical solvents.

“We have discovered that some of these ionic liquids are very effective in allowing us to produce ammonia from the nitrogen in the air around us,” Professor MacFarlane said.

“Ammonia is the source of most fertilisers, and making it sustainable is a major global challenge,” he said. 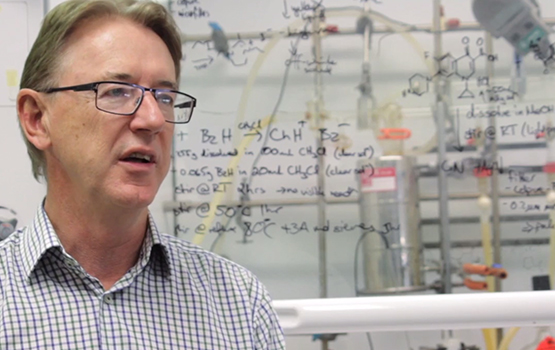 “While creating sustainable fertiliser is the priority, ammonia could also be used in the future as a sustainable fuel source.

Professor MacFarlane, who is also the Energy Theme Leader at the Australian Centre of Excellence for Electromaterials Science said he was honoured to be receiving the Victoria Prize for Science.

The Hon Pilip Dalidakis MP, the State Minister for Innovation and the Digital Economy said the $50,000 Victoria Prize was one of Victoria’s most prestigious science and innovation awards.

“The Victoria Prize for Science and Innovation has been awarded in recognition of your substantial  contribution to our understanding of the electrochemical sciences,” Minister Dalidakis said in a notification letter to Professor MacFarlane.

“In accepting the award, you are joining a select group of 29 other leading Victorian scientists who have received a Victoria Prize since 1998.”

Monash Science Dean Professor Jordan Nash said research throughout the Faculty was transforming lives across a range of sectors, including energy.

“To reduce our energy footprint we are pioneering renewable methods for energy production, storage, and transport,” Professor Nash said.

“Professor MacFarlane is a world leader in this field and the Victoria Prize for Science and Innovation is testament to his outstanding contribution to the physical sciences."

In addition to his role at Monash, Professor Doug MacFarlane is an International Fellow of  Queens University Belfast, and also of the Chinese Academy of Science. He was a PhD graduate from Professor Austen Angell’s group at Purdue in 1982 and after postdoctoral fellowships in France and New Zealand took up an academic position at Monash in 1983. He was appointed Professor of Chemistry in 1995 and served terms as Deputy Dean of Science 2000-2001 and as Head of School 2003-2006.

Professor MacFarlane was awarded an Australian Research Council Federation Fellowship in 2007 to extend his work on Ionic Liquids and then an ARC Laureate Fellowship in 2012 to continue this work in the field of protic ionic liquids.

For further information or to arrange an interview with Professor MacFarlane contact: