Male purple-crowned fairy-wrens use their purple crowns to show off about their social status and strength, according to a new study by Monash biologists published today in the Journal of Animal Ecology.

Some male birds seasonally produce a brightly coloured nuptial plumage to attract females at the start of the breeding season.

Researchers studying the male purple-crowned fairy-wrens say that despite being faithful to their partners, these birds take the trouble every year to change their head colour from dull brown to a stunning combination of purple and black plumage.

The question is why.

“These showy males actually use their purple crowns to signal social status and competitive strength to other males,” said study author Associate Professor Anne Peters, from the Monash School of Biological Sciences. 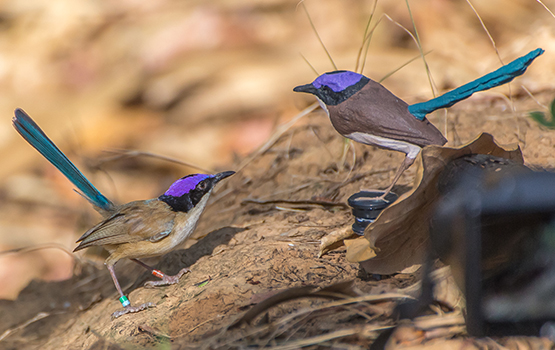 “They strongly resemble other fairy-wrens, that all develop seasonal attractive plumages,” said Marie.

“However, other fairy-wrens show extreme levels of sexual infidelity and use their seasonal plumages to attract extra-pair mates.”

The researchers also presented life-like 3D-printed models of males painted in purple or dull colours to resident males, and observed the behaviour of the territory owners.

“When resident breeder males see these models, they perceive them as intruders, and their aggressive behaviour – how long they interact with them, how close they approach and how much they sing – tells us how big a threat these models represent,” said Marie.

“We found that models painted in nuptial colours received a lot more aggression than those in dull colours.”

Associate Professor Peters, said that what made these results so interesting was that, based on what we knew about the evolutionary history of fairy-wrens, purple-crowned fairy-wrens probably had higher levels of infidelity in the past and used their nuptial plumage to attract extra-pair partners, much like what we observe today in other fairy-wrens.

“What this means is that this very attractive nuptial plumage may have switched from one function – attracting females – to another – deterring rivals – when there was a radical change in sexual behaviour,” Associate Professor Peters said.

“The research is significant because it is the first time that we find evidence for such evolutionary scenarios, and it shows how complex – even more than previously thought – the evolution of colourful plumage ornaments might be.”

The study shows that the function of plumage ornaments in attracting mates or repelling rivals may be gained or lost independently, offering some new explanations for the great diversity of brightly coloured plumages seen in birds.