Research areas covered by the Jones' group are wide ranging, but broadly speaking involve the development of unique and fundamentally important areas of chemistry which challenge previously held views on structure, bonding and stability. In particular, Jones and his team are international leaders in the chemistry of very low oxidation state and low coordination number s- and p-block compounds. Their expertise in this field has led to the preparation of numerous fascinating compound types that were thought incapable of existence at room temperature until a few years ago. In addition to the fundamental aspects of modern main group chemistry, the Jones group are at the forefront of applying highly reactive, low oxidation state metal-metal bonded systems to synthesis, catalysis, materials chemistry, hydrogen storage etc. More recently, this work has been extended to related investigations into the stabilisation and applications chemistry of low oxidation state first row d-block metal-metal bonded complexes. Examples of specific areas of research currently being investigated can be found below.

In 2007, the birth of a completely new field of chemistry was initiated by Jones' team (in collaboration with Dr. Andreas Stasch, Monash) with the preparation of the first room temperature stable magnesium(I) compounds, LMgMgL, L = bulky chelating amide (Science, 2007, 318, 1754). Such s-block metal-metal bonded systems had only previously been observed at extremely low temperatures (ca. 10 K), above which they rapidly decomposed. From a fundamental perspective, the preparation of stable magnesium(I) dimers has prompted the chemical community to re-evaluate the limits of what is synthetically achievable, and the very nature of metal-metal bonding itself. A variety of related magnesium(I) dimers have been subsequently reported by the Jones' team, and their unusual bonding examined by a barrage of theoretical and experimental techniques (e.g. J. Am. Chem. Soc, 2009, 131, 4208; Angew. Chem. Int. Ed., 2008, 47, 9079; review: Dalton Trans., 2011, 40, 5659). Current efforts are directed to extending this work to the stabilisation of the first examples of compounds bearing Be-Be or Ca-Ca bonds.

The application of dimeric magnesium(I) compounds is fast emerging, and these reactive species are finding many uses as, for example, soluble, selective, stoichiometric reducing agents in organic synthesis, e.g. reductive C-C, N-N couplings, reductive bond cleavages, C-H activations etc. (e.g. Chem. Eur. J. , 2012, 18 , 10669; Chem. Eur. J. , 2010, 16 , 938). In many cases, the products obtained from these reactions cannot be accessed with traditional reducing agents, e.g. alkali metals and SmI 2 . Similarly, in inorganic synthesis, magnesium(I) dimers have been utilised as selective reducing agents in the preparation of the first NHC adducts of dimeric germanium(0) and tin(0) fragments, which can be viewed as a soluble "allotropes" of those elements ( Angew. Chem. Int. Ed. , 2009, 48 , 9701; Chem. Commun. , 2012, 48 , 9855), a stable, monomeric germanium(I) radical ( J. Am Chem. Soc. , 2011, 133 , 10074), and an unprecedented aluminium(II) hydride complex ( Nature Chem. , 2010, 2 , 865). The latter result demonstrated the applicability of magnesium(I) compounds as soluble models for the study of Mg based, reversible hydrogen storage materials. Moreover, it has recently prompted the team to commence a systematic study into the use of highly reducing magnesium(I) compounds for the activation of abundant small molecules such as H 2 , CO 2 , CO, NH 3 etc., with a view to converting these feed stock gases to value added chemicals, fuels, pharmaceuticals etc.

It is rapidly emerging that the properties of very low oxidation state main group compounds are very different to those of normal oxidation state main group compounds, and that their reactivity can be very similar to that of transition metal complexes. In the last 5 years this realisation has led to low oxidation state main group compounds finding applications in synthesis, catalysis, hydrogen storage etc., that were previously only known for expensive and often toxic heavier d-block compounds. Jones' group have become heavily involved in this area over the past two years, and have developed a range of bulky mono- and bidentate amido ligand systems to stabilise very low oxidation state/very low coordination number main group systems that show remarkable chemistry. These include 2-coordinate digermynes (LGeGeL, L = bulky amide), and 1-coordinate Ge cations (LGe+), that facilely activate H2 in solution or the solid state at temperatures below -10 °C (J. Am Chem. Soc., 2011, 133, 18622), and quantitatively reduce the greenhouse gas CO2 to CO at -40 °C (Angew. Chem. Int. Ed., 2012, 51, 8611; 2012, 51, 9557). As part of this study, and in collaboration with Profs Aldridge and Mountford (Oxford), the first examples of acyclic silylenes have been stabilised utilising bulky amido, and nucleophilic boryl or silyl ligands (J. Am. Chem. Soc., 2012, 134, 6500; Angew. Chem. Int. Ed., 2013, 52, 568). These "textbook" compounds are not only of considerable fundamental importance, but are also the first silicon compounds to activate H2 at below ambient temperature. Over the past 3 years, Jones has extended his research interests to the transition metals, with a view to using the unique ligands developed in the group to stabilise unprecedented low coordination number, d-block metal-metal bonded compounds. The ultimate aim of this study is to harness the extremely high reactivity of these complexes for the activation, and catalytic transformation of small molecules to useful products. A particular goal of this study is the catalytic conversion of dinitrogen to ammonia at room temperature, which remains one of the "holy grails" of chemistry. Excellent recent progress has been made in this area with, for example, the preparation of bulky guanidinate bridged, three-coordinate iron(I), cobalt(I) and nickel(I) dimers, which exhibit the shortest known examples of respective homonuclear metal-metal multiple bonds (Angew. Chem. Int. Ed., 2012, 51, 8294; Chem. Eur. J., 2010, 17, 1294; Angew. Chem. Int. Ed., 2009, 48, 7406). These complexes have been shown to activate a range of small molecules, including N2 and CO2. Current efforts are directed towards preparing related, but more reactive, metal-metal bonded species, incorporating bulky monodentate amide ligands.

Since his PhD studies working on the development of reactive aluminium and gallium trihydride complexes, Jones has held a strong interest in the chemistry of main group hydride species. In his independent career, this has led to, for example, the development of the first indium trihydride (InH3) complexes (e.g. Angew. Chem. Int. Ed., 2003, 43, 2660; 2004, 43, 3852), which were previously thought synthetically inaccessible. More recently, the first examples of structurally authenticated, neutral Al(II) and Mg(II) hydride compounds (Nature Chem., 2010, 2, 865; Angew. Chem. Int. Ed., 2009, 48, 2973) have been developed in the group, while the activation of H2 by the amido-digermynes (LGeGeL) mentioned above, has afforded unusual mixed valence germanium hydride species (e.g. LGeGe(H)2L, J. Am Chem. Soc., 2011, 133, 18622). At present, the group is exploring the use of the latter in a range of reaction types, including the catalytic hydrogenation of unactivated alkenes, which is currently only possible using very expensive noble metal complexes, e.g. Wilkinson's catalyst [RhCl(PPh3)3]. 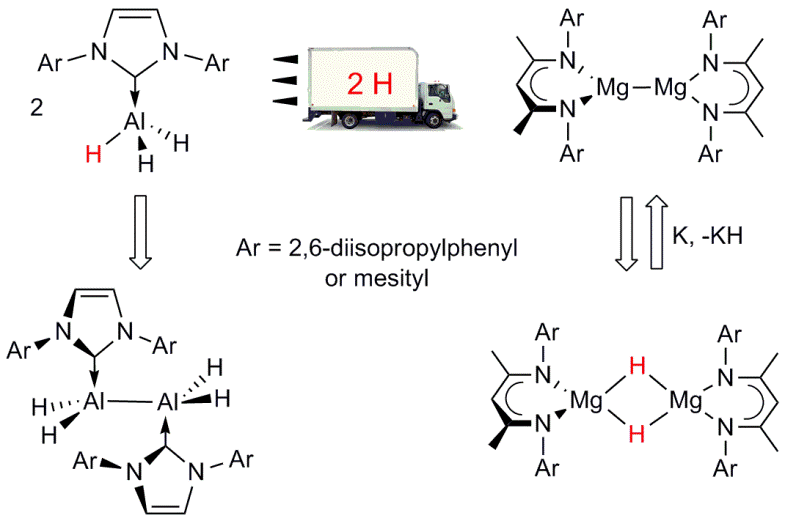 The chemistry of N-heterocyclic carbenes (NHCs) is of undoubted importance to numerous areas of synthesis, catalysis, materials chemistry etc. One of the long term research interests of the Jones group has been to stabilise valence isoelectronic group 13 element(I) analogues of these species, and to compare their chemistry with that of NHCs. This work has led to the development of the first high yielding routes to anionic five-membered, and neutral four-membered gallium(I) heterocyles. The use of these compounds as unconventional Ga-lone pair donor Lewis bases has been systematically explored and has led to complexes containing unsupported bonds between Ga and 48 elements. These include 16 first examples of Ga-M bonds which, in some cases, have led to new and controversial aspects of metal-metal bonding being uncovered (e.g. Ga→U π-bonding, Angew. Chem. Int. Ed., 2009, 48, 1077; collaboration with Prof. S. Liddle, Nottingham). Throughout this study the similarities between Ga(I) heterocycles and NHCs in synthesis, catalysis and materials chemistry has been systematically explored with remarkable results (review: Chem. Rev., 2011, 111, 3954).  Recently, this work has been extended to an examination of the chemistry of the first boron(I) heterocycle in collaboration with Profs. Aldridge and Mountford (Oxford). The highly nucleophilic nature of the boron centre of this anionic heterocycle has allowed the stabilisation of high profile compounds, such as the first acyclic silylene mentioned above (J. Am. Chem. Soc., 2012, 134, 6500).