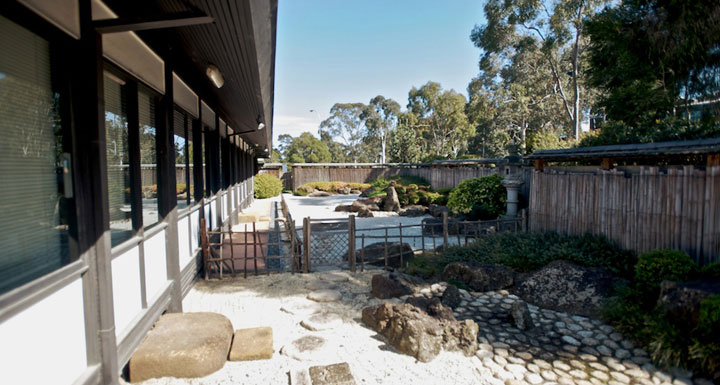 Just a hop, skip and jump from the Wellington Road bus shelters, this beautiful retreat is hidden behind a small wooden door which promises to transport visitors to a little piece of Japan, right here at Monash University.

The Rogan-En garden, or Japanese garden, was constructed in 1996 for the Japanese Studies Centre by Angyo Nurseries and Japanese master gardener, Mr Hajime Watanabe. At the time, all materials were imported from Japan, including the rocks!

Following a period of severe drought, the gardens underwent a refresh in 2007 which saw the introduction of a few carefully selected Australian natives, chosen for their similarity to Japanese plantings, and greater tolerance to the Melbourne climate.

Access to this Garden is restricted. Tours are organised occasionally to the Garden but requests can be made to Buildings and Property Division.

The white pebbles in the Japanese garden are raked into a pattern symbolising waves, or rippling water, in keeping with traditional Japanese rock gardens.