To support AHRC Recommendation 6, Monash University will release the following data (as shown in the table below) at 12-month intervals, with the preceding year's data updated at the end of February of each year.

All reports of alleged sexual offences are referred to Monash University's Safer Community Unit which provides information, advice, support and referrals to appropriate support service areas of the University and assistance and referrals to external agencies including Victoria Police and the Centre Against Sexual Assault (CASA).

Monash will assist a student to make a report to the Police and CASA but cannot make a report on behalf of a student if they are over 18 years of age. Monash will always respect the rights of students over the age of 18 years to determine what action they wish to be taken.

At all times, Monash will comply with legislated mandatory reporting obligations. Monash will continue to invest considerable resources to raise awareness of sexual assault and sexual harassment and lift the visibility of support services and reporting options for students. 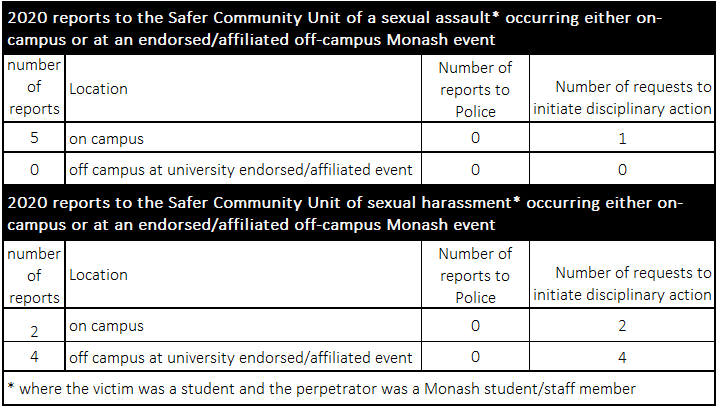