School researchers have developed a new genomic risk score for melanoma (skin cancer), and shown it to be of value when used to predict melanoma risk in older people. Their findings were published in the Journal of the National Cancer Institute recently. 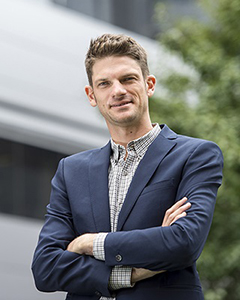 Dr Paul Lacaze, Head of the School’s Public Health Genomics team, led a group of investigators from across the School, and national and international experts, to develop the new polygenic risk score (PRS). An individual’s genomic risk of developing melanomas may be influenced by numerous genetic changes across their DNA. Each in isolation may not show a strong effect, but collectively these genetic changes can cause a sharp increase in risk. A PRS is a new way of aggregating the effects of these many genetic changes into a single, easily understandable risk score.

Dr Lacaze says, “Melanoma incidence rises with age, so the role of genetics in an older population has significant clinical relevance. Advancing age is associated with thicker melanomas, poorer survival rates, and greater recurrence risk, yet we don’t have a clear understanding of the mechanisms underlying the disease pathway in older people.”

Younger people who develop melanoma typically do so with a smaller lifetime accumulation of UV exposure than older people, who have had more time to suffer damage from the sun’s harsh rays. A common hypothesis suggests that melanoma development in young people is therefore more heavily influenced by their genetic risk, while in older people it is more strongly driven by accumulated UV-related damage. However, no study until now has assessed a genomic risk score for melanoma in a population of older adults (aged over 70 years) , despite the high incidence of melanomas occurring in this age group.

“Historically, visual assessments like skin checks have guided melanoma risk prediction, but genomic risk is increasingly being used in conjunction with other measures, to improve risk prediction. With ongoing rapid advances in genetic testing technology and our ability to interpret results, genomic risk scores have the potential to improve clinical risk management, and advance the latest medical knowledge,” said Dr Lacaze.

The team used results from the world’s largest genome-wide association study (GWAS) meta-analysis of melanoma. Published in 2020, it revealed 56 different genetic variants associated with melanoma, many more than were previously known.

Dr Lacaze says, “We used this new information to develop an updated PRS, which we then validated in a well-characterised and independent cohort of healthy older people. Fortunately, we had an incredible resource on our doorstep.”

The Aspirin in Reducing Events in the Elderly (ASPREE) study, which released its primary results in 2018 to global acclaim, has provided a unique and scientifically robust dataset that is ideal for investigation of new genomic risk scores.

In the ASPREE cohort, the melanoma PRS showed a strong association with incident melanomas diagnosed during the trial, and the team found meaningfully different rates of melanoma between low-, medium- and high-risk PRS groups. This highlights the potential use of PRSs to improve the prediction of melanoma risk in older populations, where the burden of disease is highest.

The PRS may also improve risk stratification for melanoma, and allow improved targeted screening and surveillance for those at greatest risk.

“It’s wonderful to be able to contribute this new knowledge, which can help manage this disease that is so prevalent in our country.”