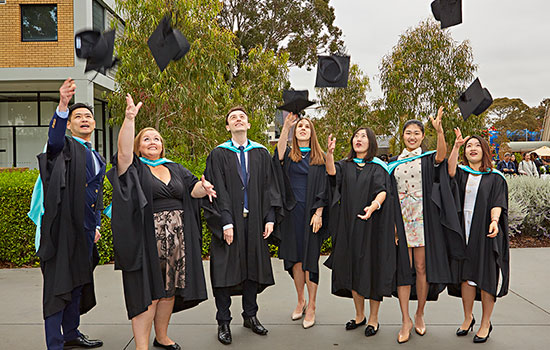 More than 3,200 students are set to graduate from Australia’s largest university, with Monash University’s Clayton campus hosting graduation ceremonies across a week-long celebration for students, family and friends.

Nationally and internationally renowned industry leaders will return to their alma mater to speak at one of the 10 ceremonies to be held during the week.  Kicking off on Monday 23 October, attendees of the Monash Business School graduation ceremony will hear from prolific Victorian business-woman Janette Kendall, a Non-Executive Director of major ASX-listed companies including Vicinity Centres and Nine Entertainment.

President and Vice-Chancellor Margaret Gardner AO said Graduation Week was one of the most important events in the University calendar.

“This is a proud moment for the Monash community as well as for the family and friends of students joining us to celebrate their achievements,” Professor Gardner said.

“For the students themselves, graduation is a very important milestone. Not only does it mark the culmination of years of study and endeavour, it represents the beginning of new opportunities as they advance further into their careers and become members of the global community of Monash alumni.”

A list of other Monash alumni speaking at graduation ceremonies include:

Monash University is the largest university in Australia and consistently ranked among the top 100 universities in the world. It has earned an enviable national and international reputation for research and teaching excellence, and is a member of Australia’s Group of Eight research-intensive universities and the M8 Alliance of Academic Health Centres and Medical Universities.