Blood vessels like a 70 year old: Scientists find cause of fetal growth restriction

Around 5% of babies born in Australia are just a third of the size they should be and suffer lifelong health complications as part of a condition known as fetal growth restriction (FGR). 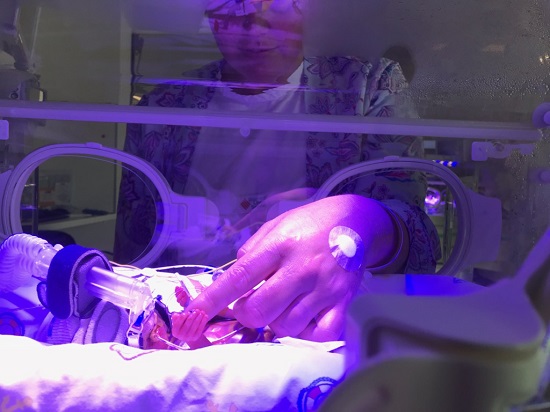 Little Sonny is the smallest baby ever delivered at the Monash Children's Hospital, born at 26 weeks weighing only 446g. He is now five-months old and thriving thanks to the care he received at the hospital.

FGR means their growth slows or stops during pregnancy, often due to problems with the placenta, but the exact cause is a mystery. If severe, the baby is delivered prematurely, increasing the risk of death or health problems.

Now, Monash University research has found the answer lies in the blood vessels of the placenta and newborn.

The research, published in the Journal of Perinatology, found women, who are otherwise healthy, start to experience a pregnancy-induced hypertension at around 18-20 weeks gestation. This causes elastin in the blood vessels to be replaced by collagen, which is 100X stiffer - restricting nutrition from passing through to the fetus.

The mother’s hypertension returns to normal as soon as the infant is born, however the infant may go on to suffer lifelong health problems like high blood pressure, diabetes and cardiovascular disease.

Arvind Sehgal, Professor of Pediatrics at Monash University and Head of Neonatal Cardiovascular Research at Monash Children's Hospital, said the vessels in these infants are behaving like vessels of a 70 year old.

“We call it early ageing – it shapes the rest of their life,” Professor Sehgal said.

“Unfortunately the blood vessels of these babies never become normal. They are thick and stiff and affect blood flow to the fetus before birth and to different body organs after birth.

“Data has shown that some even begin to develop hypertension by the age of just 13 and a proportion of them become diabetics by the time they are 18.”

There is no treatment or cure for FGR - currently babies born with FGR are not screened or followed up as they grow so complications or disease attributed to FGR go unnoticed.

Professor Sehgal said screening them early, keeping them under close follow up and starting treatments early is necessary, rather than waiting until they present later in life.

“We need to diagnose this early so we can find the best interventions,” Professor Sehgal said.

“Without interventions, this population is on a trajectory of poor vascular health. They are more likely to become adults who will die of stroke, increased risk of hypertension, diabetes and a range of health problems.”

A new trial about to get underway could hold hope. The trial will look at the effectiveness of melatonin (antioxidant) therapy on the blood vessels of mums-to-be carrying a FGR foetus. Once those babies are born, the researchers will do an ultrasound of their blood vessels to determine if the melatonin therapy worked.

Along with reviewing extensive data, the research tested sections of the human placenta and used high frequency ultrasound to show the poorly developed blood vessels in the placenta and newborns. In addition, high-tech artificial modelling also revealed problems with the blood vessels. Monash Children's Hospital and Monash University is the only institution in the world with all three facilities available to study blood vessel health in newborn babies.