A commemorative ceremony to mark 100 years since the knighthood of Sir John Monash was held at Monash University this week. 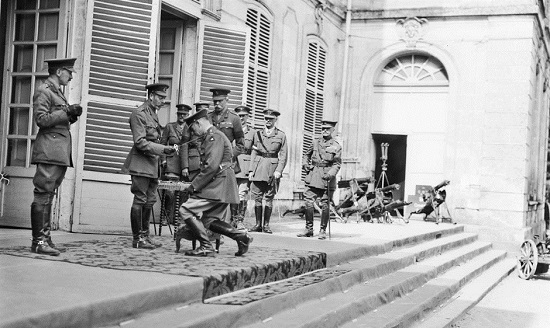 His Majesty King George V, knighting Lieutenant General Sir John Monash, Australian Corps Commander, at the Corps Headquarters in the Chateau, when General Monash was invested as a Knight Commander of the Bath.

Monash was made a Knight Commander of the Order of the Bath by King George V on 12 August 1918, at Château de Bertangles. This was the first time in 200 years that a British monarch had knighted a commander on the battlefield.

The University has been gifted the original 1918 Royal Warrant for Sir John Monash's knighthood, complete with the signature of King George V. Descendants of Sir John Monash were invited to view the official document for the first time today.

A display of the complete documentation, along with historic photos and various Sir John Monash artefacts will be made available to the public at Monash University early next year in celebration of his life and legacy. A virtual display will also be made available on the University website.

President and Vice-Chancellor, Professor Margaret Gardner AO said Monash University was proud to be a guardian of his legacy, to celebrate Sir John’s contribution to Australia and to continue to educate the broader community of his significance.

“Sir John Monash is not just our namesake, his legacy lives on every day through our research, our students, and our desire to lead positive change,” Professor Gardner said.

“We are grateful to the Monash family for entrusting the University as a guardian of his legacy, and in allowing us to associate his name with many of our most prestigious programs and awards.”

The Sir John Monash connection can be traced back to 1881 with the establishment of the Melbourne (later Victorian) College of Pharmacy - now known as Monash University’s Faculty of Pharmacy and Pharmaceutical Sciences.

More than 200 alumni and students of the College served in the First World War, most under Sir John’s command -19 died on service including four students whose education and training was cut tragically short. Sir John visited the College at least once, and in 1927, he was the guest of honour at the College’s Prize Giving.

“As an institution responsible for educating the next generation of pharmacists, we believe it is important that our students have an appreciation of the lineage into which they are stepping and of the men and women who shaped their profession. Today’s event was a wonderful way to celebrate that connection with the past,” Professor Charman said.