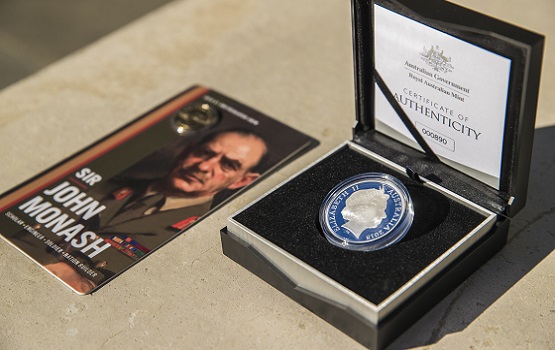 Monash University is proud to carry the name of General Sir John Monash, whose legacy has been recognised in two commemorative coins produced by the Royal Australian Mint.

The $1 and $5 coins were launched yesterday in a ceremony at Clayton campus by Hon Michael Sukkar MP, who acknowledged Sir John Monash’s extraordinary contribution to Australian society.

“Sir John Monash was an outstanding commander during World War One, the first General Manager of the State Electricity Commission of Victoria, a highly successful businessman and a brilliant thinker and leader,” Mr Sukkar said.

“It is fitting that the Royal Australian Mint has acknowledged Sir John Monash’s significance through these coins. They are a tangible keepsake and a reminder of the story and achievements of one of Australia’s greatest figures.”

In a speech given before a bronze statue of Sir John Monash, Monash University's Provost and Senior Vice-President, Professor Marc Parlange, noted the significance to the university of the scholar, engineer, soldier and nation builder.

“He was a man who, above all, sought to use his education and abilities for the benefit of the community,” said Parlange.

“As the son of immigrants, John was originally an outsider to the Melbourne establishment. He was driven and ambitious to make his mark. Monash University has been similarly ambitious. Even though we are a young University, for 60 years our research has changed the world and we are now one of the world’s top 100 universities.”

The coins’ release arrives ahead of the Centenary of ANZAC, marking 100 years since Sir John Monash’s important achievements on the Western Front. In 1918, the Australian Army achieved its greatest victories in World War One against the retreating German forces. It did so under Sir John Monash’s command.

With the forthcoming Centenary of ANZAC, the University remains committed to the posthumous promotion of Sir John Monash to the rank of Field Marshall, to ensure Monash the man receives the recognition and acknowledgement he so thoroughly deserves.

“These coins are an important part of that recognition but more work must be done,” said Parlange.

“Only then can the immense contribution and legacy of Sir John Monash be truly recognised.”

Royal Australian Mint CEO, Ross MacDiarmid, said the Mint had a proud history of commemorating Australia’s history through coin, with the Sir John Monash coins adding to this tradition.

Read more about Sir John Monash and his legacy here.