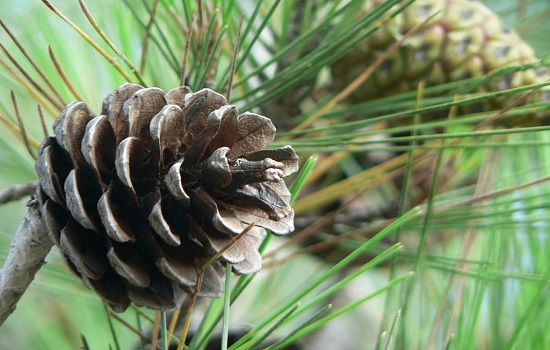 Conifers that were living at the South Pole show an extreme adaptation to forest fires.

Until now, the origin of this ability has been unknown from the fossil record. But scientists have now found fossil evidence showing that many tree species from 100 million years ago were not only protected from fire, but they may have required fire to reproduce during one of Earth's most intense greenhouse periods. This was also a time of extreme fire risk around the globe.

“In Australia, much of the flora is highly flammable, and have evolved strategies to cope,” said Dr Chris Mays, a researcher at the Monash School of Earth, Atmosphere and Environment, and lead author of a study published recently in Geology.

“But some modern conifer trees in Australia, as well as Africa, North America and along the Mediterranean, have an advanced adaptation to fire.”

In these areas, conifers have seed cones in which their mature seeds are kept stored for long periods in anticipation of a forest fire.

“The seeds can be stored for many years within these cones, sealed by resin which melts at high temperature, so that the seeds can be spread onto the fertile ground after a fire,” Dr Mays said.

This ensures the seeds are released: when seed-eating animals have been forced out of the area they land directly on fertile soil without lots of leaf litter, and without the shadow of canopy leaves, which would have been burnt in the fire.

“Until now, the evolutionary origin of this ability has been largely unknown and the fossils have not provided many clues,” said Dr Mays.

“Our study identified fossils from fire-adapted seed cones in several places on Earth, but all come from the same interval, about 100 million years old during an extreme global greenhouse event.”

Using an imaging technology called neutron tomography, similar to a hospital X-ray but using neutrons instead of X-rays, the fossil cones were found to contain canals filled with fossil resin, or ‘amber’.

This was done at Australia’s research nuclear reactor at the Australian Nuclear Science and Technology Organisation in Lucas Heights, NSW.

"If it had not been for the greenhouse periods of the past, we would not have many of the fire-adapted plants we see around the world today,” Dr may said.

One hundred million years ago, there was a very strong greenhouse effect on Earth.

The average temperature was about six degrees warmer than today and the air contained much more oxygen and carbon dioxide. Forests covered large parts of every continent, even in the polar regions, and the high oxygen levels in the air made all plants highly flammable, so fires were far more common than in the modern world.

Fossil layers from this time show sediments with a large amount of burnt, or charcoalified, plants which testifies to an intensely fiery time. The extreme environment during this period was a major driver of evolutionary change, and this was a key time for the evolution of modern fire-adapted ecosystems.