Journalism graduate Matilda Boseley has won the 2019 Walkley Student of the Year award, which marks the third consecutive title won by a Monash scholar.

Matilda won the Walkley from a field of three student finalists for her outstanding work for Mojo News and The Age newspaper.

Matilda’s entries included I had no way of getting home’: Calls for changes to liquor laws, Grey Area: Let’s Talk About Rape and ZOE – Vegans Invade a Melbourne Slaughterhouse.

Matilda, a Channel 7 journalist, thanked the support of her family, partner and her Monash colleagues and mentors, particularly lecturers Corinna Hente, Alicia McMillan and Julie Tullberg.

She also appreciates the support of The Age newspaper team, who published her investigative story. 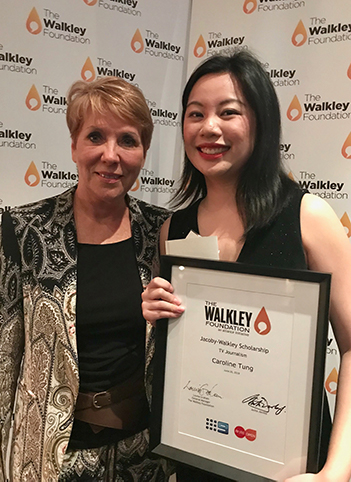 “I’m unbelievably excited, I didn’t think this necessarily was on the cards. I’m in shock, it’s amazing … brilliant,” Matilda said.

Matilda said the stories submitted for this award were focused on young women and the issues that were important to them.

“My pieces covered topics like safety on the streets, rape and sexual consent, and the Melbourne vegan extreme activist movement, which is led by women,” she said.

Master of Journalism graduate Caroline Tung won the coveted 2019 Jacoby-Walkley scholarship, which provides her with the opportunity to learn from Channel 9 journalists and producers.

Caroline said her journey through the Monash journalism program taught her the true meaning of resilience, determination and gratitude.

“I produced stories that I was very passionate about – giving a voice to people with disabilities and also for young women who otherwise had no voice at all,” Caroline said.

“I will be moving to Sydney in August and I’m absolutely thrilled to learn from my journalism heroes at Nine.

“My dream is to work for 60 Minutes so I see this Walkley scholarship as a first step of getting there.”

“The quality of their work is impressive and they have bright futures in journalism and news ahead of them,” Professor Hutchins said.

“They are excellent ambassadors for the journalism program at Monash, and I’m proud to say that our staff have contributed to their development.

“Congratulations especially to Matilda and Caroline, but also to all the students and staff who have supported them.”

Monash Head of Journalism Associate Professor Fay Anderson said Matilda and Caroline’s awards were an excellent reflection of both the undergraduate and Master of Arts programs.

“We congratulate both Matilda and Caroline for their outstanding achievements and commitment to ethical journalism,” Associate Professor Anderson said.

“The awards are a reflection of the high calibre of our students, the larger cohort and our teaching staff who provide outstanding guidance.”